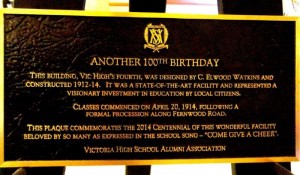 In May 2014, about 1000 Vic High alumni and guests gathered to celebrate the 100th anniversary of our present Vic High building. It became the fourth building to house Vic High when it opened in April 1914.

This event was the school’s third major event of this kind, following the 1976 centennial of the founding of the school, and “Vic High 125” in 2001. Like those previous celebrations, the 2014 event was sponsored by the Alumni Association and organized by a committee of volunteers. The hard-working committee was chaired by Alan Lowe (VHS 1979), former Prime Minister of Vic High’s student parliament and former mayor of Victoria.

The fun actually began on Thursday May 15 with a separate-but-related event. This was the inaugural Black and Gold Dinner, held to honour four Vic High alumni who have created national and international reputations in the fields of athletics, cultural history, journalism, and visual art. Click on Black and Gold Dinner in the Navigation panel at right to access a write-up and photos. 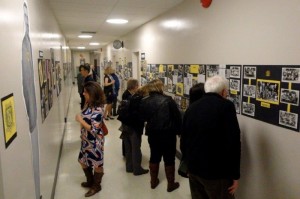 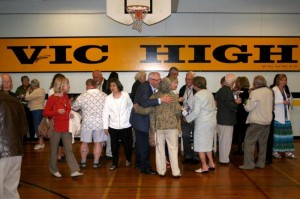 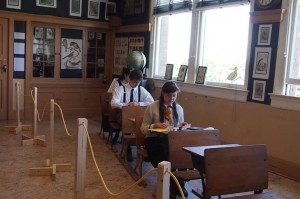 On the evening of Friday May 16, about a thousand Alumni and guests gathered at a Wine
and Cheese evening at the school. A major attraction was a series of heritage photos lining the hallway from the Vic High Archives in Room 100 to the new Fairey Tech foyer where registration and souvenir sales took place. Photo displays were also mounted in the Fairey Tech foyer and the main hall, all on a “then and now” theme, in addition to permanent displays around the balcony of the Old (Roper) Gym.

In both gyms, grads mingled, found old friends, and remembered when. A special treat awaited in Room 303, half of which had been converted into a 1914-era classroom; current Vic High drama students, in period costume, played a scene involving a teacher and three students of the era.

On Saturday afternoon, grads gathered again at the school for an Open House. Many wandered the halls to view archival displays they had missed the night before. In the Lawrie Wallace Auditorium, a lively program entertained a full house. It began with original musical skits performed by alumni from the classes of 1960-62, entitled “A Day in the Life of Vic High.” Then there were official welcomes from Victoria mayor Dean Fortin, Alumni chair Dr. Barry Gough, school board chair Peg Orcherton, and former Vic High principal Dave Watkins, whose grandfather C. Elwood Watkins was architect of the present Vic High building. 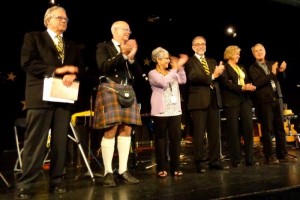 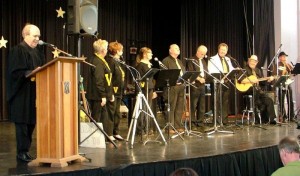 Current students were represented by Vic High’s “Platform 61” dancers, under the direction of teacher Kerry Krich. Finally, the Reunion Orchestra, featuring members of the celebrated Vic High Orchestra of the 1950s and ‘60s, joined with current Vic High strings players in a mixed program of classical hits and popular instrumental pieces. Their legendary conductor Dorothy Evans was not able to attend, but she took part via a phone call from the stage! 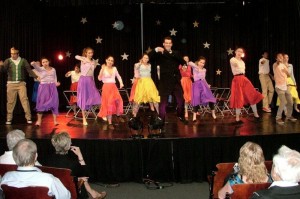 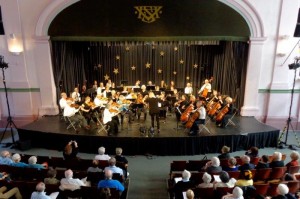 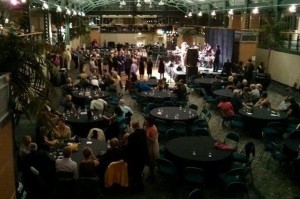 On Saturday night, over 300 grads attended a nostalgic dance at the Crystal Garden. Music was provided all evening by the amazing Vic High Rhythm and Blues Band, under the direction of its founder and leader Eric Emde. But times have changed at the Crystal, so no one got thrown into the pool!

Sunday was set aside for individual grad classes to organize their own reunions. Taking advantage of this opportunity, at various venues around town, were the grad classes of 1959, 1964, 1968, 1970 and 1979. You can read reports of their events on this website – see Navigation panel at right.

On Monday Vic High was represented in the traditional Victoria Day parade – most of us remember being taken to that parade as children, and it is still going strong. The Vic High R&B band was a startling and delightful contrast to the many marching bands that always appear in this parade. Also appearing was Vic High’s electric truck that was converted from gas to battery power, a project of students in the Environment Club and the Career Prep Auto Body program. 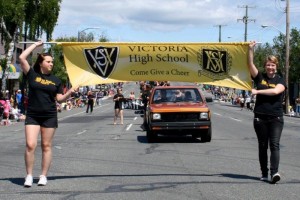 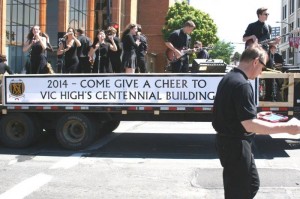 The weekend was a success in many ways, one of which was financial. Thanks to both registrants and sponsors, the event produced a surplus of almost $40,000, which will be directed toward the Alumni Association’s Vic High Stadium renewal project.

So many people helped make this a memorable event, but we’d like to mention a few of the hardest-working folks on the committee: in addition to chair Alan Lowe and principal Randi Falls, thanks must go to treasurer Bob Whitmore (VHS 1967), registrar Margaret Goodwin (VHS 1964), volunteer coordinator Lesley Quin (VHS 1972), dinner chair Anne McKeachie (VHS 1968), entertainment coordinator Don Kissinger (VHS 1959), and souvenir coordinators JoAnne Botten and Mary Ann Roueche (both VHS 1968). The group presenting “A Day in the Life of Vic High” was led by Russ Leech (VHS 1960). The Archives team was led by Debbie Blackie and Linda Smith (both VHS 1967), and the 1914 classroom project created by Kathryn McAllister (VHS 2009), Heather Ashton and Anne Boldt (both VHS 1967). 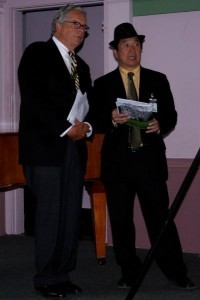 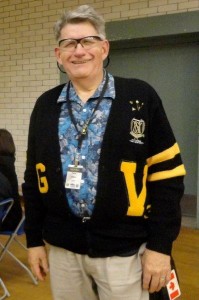 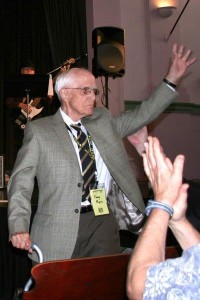 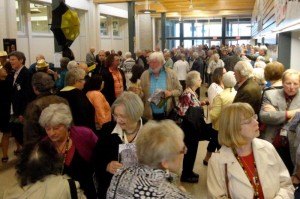 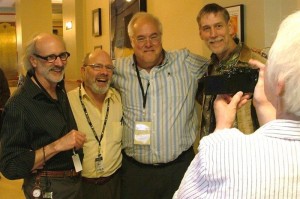