Who Was Your Favourite Teacher?

You are here: Home1 / Stories2 / Who Was Your Favourite Teacher?

Who Was Your Favourite Teacher?

We asked newsletter readers to tell us about their favourite Vic High teacher. It’s simple and yet so extraordinary, the impact just one teacher can have on a student. Life-changing!  Read on. (Some names are linked to obituaries or other info on the website.) 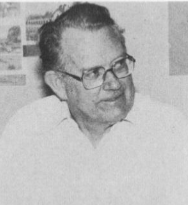 …my woodworking, drafting and boat building instructor 1986-87.  I learned a lot of great skills from him which I still use to this day. The most important thing was to have confidence in myself.  After Drafting class one afternoon he told me I should apply for a district scholarship.  Sure, I was straight A’s in Industrial Arts but my reply was, “I am not smart enough to get one”.  This lack of confidence stemmed from the fact I struggled academically with dyslexia.  I’ll never forget his voice, the one that a teacher uses to wake up a class.  “Never say that, you are smart and you can do anything you put your mind to!”  This was for me a life defining moment.  I worked hard and did get the scholarship as well as the Vic High Technology award for 1987.

Thirty-five years later I own Vintage Woodworks Inc.  Over the years I have employed many people, been part of the restoration of thousands of buildings in BC and North America and also helped numerous people achieve Joinery Red Seal tickets.  I am proud to say that my company is currently involved in the restoration of the windows at Vic High.

A huge thank you to Fred Packford and all the teachers at Vic High that make a difference in people’s lives.

I renewed our connection after high school at Langham Court Theatre. He and his wife Betty were friends for many years. I always valued their friendship and mentoring!

It is hard to choose. There are so many. Tommy Mayne is one.

…with a tip of the hat to Miss Roberts, Mrs. Cameron and Mr. Murphy.  Loved Mrs. Cameron’s 1955 Packard! 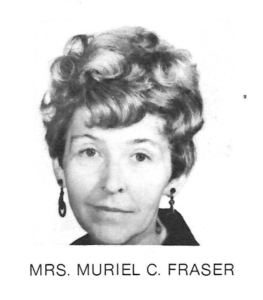 Mrs. Fraser taught Sewing 11 and 12, and Clothes Designing 12. I’d taken all three courses and designed my grad dress ( modeled it in the year-end fashion show). Mrs. Fraser’s standards were high, but she was always supportive and encouraging. I remember her son was an actor, which seemed very grand. She was a very classy lady, and it was her beautiful clothes, beautifully-coiffed hair, and her ultra-cool red sportscar that really impressed me. I can still see her getting in her red top-down Austin Healey (I think that’s what it was?) parked under the memorial trees that used to line the little stretch of Vining Street from the school down to Fernwood. She had a scarf over her bouffant hair-do tied around her neck like in the movies, and away she drove.  Coolest teacher I’d ever seen, and probably part of what inspired me to buy my first roadster, a 1972 MG Midget, at age 21. Although I’m sure I’ll never be as cool as Mrs. Fraser.

…was my favourite teacher in 1972 & 1973. He taught Machine Shop and Power Mechanics over at Fairey Tech. He was very patient and had a wonderful personality. All round great teacher. He was very supportive, gentle spirit (cannot recall him ever raising his voice). I graduated in 1973, spent a lot of my last year over at Fairey Tech doing various projects/assignments under his guidance & teaching.

I first had him in 1946 (just back from WWII) as our gym teacher at North Ward.  Then again at Vic High 1951 – 1954, best English teacher I ever had.  You never fooled around in his class, he made you work hard, but enjoy the studies.

Because old Central School was being torn down and replaced, half of the grade nines were sent to Vic High in 1954 while the other half stayed in one of the two old buildings for another year. The decision was based on our future education plans, and since I had no university plans the powers-that-be determined that I should be set on a path to office work. Vic High had the Commercial classes. Not an unusual push for girls in those days who weren’t planning on nursing or teaching.

Bad move. Within a month or two I had managed to be assigned to Art classes instead of Home Ec., as well as a great English class.  ( I credit Mrs. Hodson, who taught French but doubled as a counsellor.) I remember my mother saying that she could teach me to cook if I was interested, but couldn’t teach art. Mothers didn’t get very involved with schools in those days so I made my own case. I managed to spend time and learn a great deal with Mrs. Frances Cameron in the fourth floor Art room for four years. She accepted my interests and allowed me some deviation from the rest of the class occasionally. I have often said that I learned more history in her classes, based on the stories she presented in paintings, than anywhere else in school. 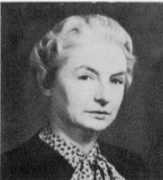 School was a really formative time for me in Miss J. Roberts’ English class. It was easy to see that she loved her subject, from literature to proper grammar. I was always a reader, but learned to appreciate writing in new ways, expanding my vocabulary along the way. Neither of these teachers could be described as warm and fuzzy, but they certainly knew how to teach, and I’ve been grateful for that many times. As it turned out for me, I had a rather hybrid education for the day. I learned to type, had business English courses as well as those marked for university prep, and I managed to have double art classes in my grade 12 year. To top it off I was recommended for two jobs directly after graduation…one in a bank, the other as an artist for the new CHEK-TV. I took the art job…and that’s another story.

My story is an example of the flexibility that I think Vic High has always shown for students.

Vic High Icon, Reg Reid Always There With A Smile
Scroll to top