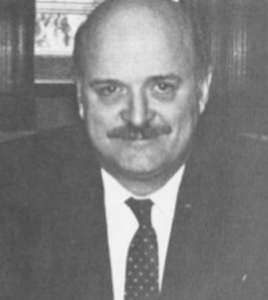 In the mid-1980s, Vic High Principal Dave Watkins wore his Victoria High School jacket to basketball games as a beacon against a false perception about the school. He was proud of that jacket with the school crest he helped to redesign, and he was very proud of Vic High.

Watkins had come from Spectrum Community School in 1984 to the 1914 Vic High building on Grant Street that his grandfather, Elwood C. Watkins, had designed. His grand-uncle, Samuel J. Willis, had been the first principal in the newly opened building and went on to become BC’s Deputy Minister of Education. S.J. Willis school, where Vic High students attend classes while that 1914 building is being seismically upgraded, is named after him. Dave Watkins was definitely home.

Watkins made a point of wearing his Vic High jacket to those games because he wanted to change the perception that Vic High students were dispirited due to declining enrolment, and due to good athletes abandoning the school during an open-boundary era.

But current Alumni member, Gus McTavish, Vic High Vice-Principal at the time, said those perceptions were false because the students still had enormous school pride.

“To Dave, it was a challenge,” Mr. McTavish recalled. Mr. Watkins, who died on Sept. 10, 2018, saw that a change in perception was badly needed and he was determined to lead that change. 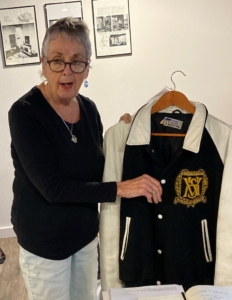 It was true that enrolment had declined to a low of 450 after Grade 10 was dropped and the school only offered Grades 11 and 12, and that some good athletes decided to take advantage of the “open borders” and go to Mt. Douglas for its sports programs and teams.

Keith McCallion, who took over from Mr. Watkins as Vic High Principal in the fall of 1989 and who is a very active volunteer with the Vic High Alumni, was working at the School District 61 headquarters in the early 1980s. He said S.J. Willis and Harbourview Elementary had already been closed, but rumblings that Vic High should have been one of them were still being heard throughout school board offices.

McCallion said in the late 1970s, Lawrie Wallace, VHS 1930, also a former Vic High teacher, led a group which lobbied against shutting down Vic High. Wallace had led the successful Vic High Centennial in 1976, helped found the society that later became the Vic High Alumni, and went on to become BC’s deputy provincial secretary and deputy minister to two BC premiers.

Donna Jones, VHS 1957, another Vic High Alumni Association volunteer, became a School District 61 trustee in 1983. She said by 1984 the danger of Vic High closing was basically over because two schools had already been closed. But the trustees wanted to make sure a dynamic leader replaced retiring Vic High Principal Jack Lowther, and Dave Watkins was that leader. 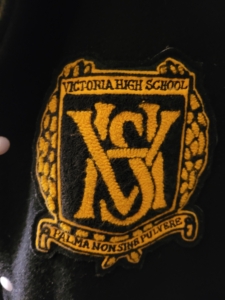 The crest Watkins helped design. It has since been redesigned.

“Dave was a great guy,” said Mr. McTavish, who added that Mr. Watkins was genuinely enthusiastic about improving school pride and spirit. 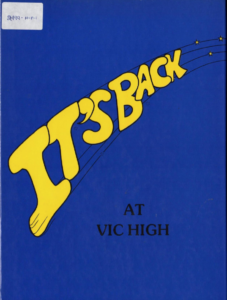 The 1986-87 Camosun is a testament to Watkins’ enthusiastic leadership, with its cover proclaiming, It’s Back…At Vic High, and its contents built around the theme The Spirit is Back.

Mrs. Watkins donated Dave’s jacket to the Vic High Archives & Museum, which are funded and managed by the Vic High Alumni Association volunteers.

“I knew it had to have a forever home,” she said.

Principals Jack Lowther and Dave Watkins may have borne the brunt of misperceptions about Vic High in the ‘80s dark days, but Watkins is credited with fanning the flames of Vic High school spirit and leading Vic High back towards its rightful reputation as an extraordinary school.

“I think he turned things around,” said Mrs. Watkins.

And his jacket, which will be proudly displayed once Vic High reopens in 2023, is definitely a symbol of Dave’s spirit and the turn-around he led.

From Art Lover to Art Expert
Scroll to top