Vic High Icon, Reg Reid Always There With A Smile

You are here: Home1 / Stories2 / Vic High Icon, Reg Reid Always There With A Smile

Vic High Icon, Reg Reid     Always There With A Smile 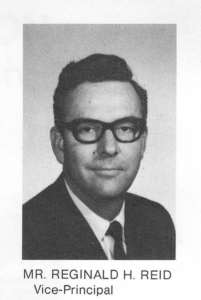 I met him when he was Vice-Principal at Central Junior High School (1963 – 1967), and I got to work with him on the student council 1966-67. My grandmother, Mrs. Baker, was school secretary then and had great respect for him. In 1967 Reg and I both headed to Vic High where he and Principal Duncan Lorimer were a compassionate, respectful and supportive team. Years later, I was thrilled when Reg and his equally extraordinary wife, Iris, came to my grandmother’s memorial service, bringing their heartfelt hugs and happy memories with them.

2014. My dad (Roy Baker, VHS 1945) and I went to the big open house at Vic High and there in their wheelchairs, beaming broadly, arms outstretched with hugs, were Reg and Iris. As long as there was life in them and someone to drive the van, Reg and Iris would simply never miss a Vic High gathering. It was always ever thus.

1957 – 1963 Reg taught at Vic High, English, History, and Physical Education, and he loved connecting with students. Did he miss that connection when he became Vice-Principal? Maybe. But it’s a good bet his instinct to connect with students led to his tireless support of anything and everything involving Vic High students – sports meets, arts performances, school clubs, even just friendly smiles in the hallways. And it became what defined him: his ability and his willingness to reach out and connect. 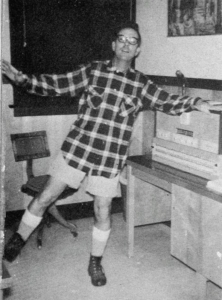 While Vice-Principal at Vic High, 1967-1977, he was offered the position of Principal at Lansdowne Junior High School. But with his kids about to attend there, (and his heart clearly at Vic High), he turned down the offer. “He also didn’t want to leave his family during the summers to get the Masters in Education principals were supposed to have,” says daughter Linda Reid (VHS 1977). “As soon as his work was done every summer, he and mom packed up the family and we went camping.”

Linda and her sister Janet (VHS 1975) were at Vic High while Reg was Vice-Principal, although few at the time made the connection. “One day a friend from the basketball team and I went to the office for something,” says Linda. “I headed over to go into Dad’s office and my friend was horrified! ‘You can’t do that!’, she said, ‘he’s the Vice-Principal!’ She was pretty surprised to learn that he was also my dad.”

Janet remembers many things about her dad. “He was always quick to compliment the staff, the custodial staff, the grounds staff, on how good Vic High always looked,” she says. “And he was so proud of the students, of the diversity of the student population, of kids from so many different cultures working and playing together.”

Reg was a very skilled public speaker from an early age, so good, in fact, that having dropped his valedictory speech en route to the grad stage in 1943, he gave the entire very inspiring speech from memory. Reg was also a good listener and genuinely interested in people, particularly students. He never forgot a student’s name, or the names of their siblings, even years later. “He really wanted students to have good memories of Vic High,” says Linda. 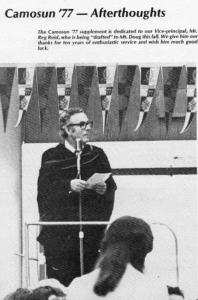 1977. Reg was drafted to Mt. Douglas High School as Vice-Principal. Tributes poured in. Then there was the Report to Counsellor on Student Reg Reid from teacher ‘Al Stabrice’. (Curiously no such teacher appears in the Camosun that year?) Here’s a quote from the Report: Distracted by extracurricular activities – goes to them all and stays to the bitter end – may lack sleep.  But read the whole thing (here). It’s hilarious.

That dog in the report? April 22, 2022 Guy Lafleur died. Five years to the day after Reg Reid died. Reg loved him – Guy Lafleur the hockey legend, and his namesake – Guy Lafleur the family’s Brittany Spaniel. Reg – and Iris – took Guy Lafleur to many Vic High events, despite him peeing on one occasion on the opposing team’s First Aid kit. Guy LaFleur, not Reg.

The 1977 Camosun supplement was dedicated to “our Vice-principal, Mr. Reg Reid, who is being “drafted” to Mt. Doug this fall. We give him our thanks for ten years of enthusiastic service and wish him much good luck.’ One student had their poem printed in the supplement.

The knowledge that you’re leaving us is flowing down the halls.

“Oh but he’ll be back”, is quietly whispered by the walls.

The time you’ve spent, it seems so dear.

It’s been a long time that you’ve been here.

A stranger perhaps, and yet you’re a friend.

Strong willed and yet, like the trees you can bend.

A smile you gave me in the halls as we passed.

A small but friendly smile all through the year did last.

For each time that I saw you, a new one took its place.

It seemed to pick me up while in the year long race.

As down the hall you’re walking, “He’s leaving us”, but then;

But Reg Reid was, and is, Vic High to the very core. His name lives on in the Vic High Alumni’s Reg Reid Leadership Cup & Award, reminding everyone of one man whose Vic High spirit will always be felt and remembered.

Here’s a link to some articles and to his obituary. Send us your memories and we’ll share them here.