You are here: Home1 / Stories2 / Vic High Alumni are Everywhere

Dallas Road was great today, walking along that section on Ross Bay between Clover Point and the ‘bone orchard’.  That’s what we called Ross Bay Cemetery back in my day. Blue sky, perfect ocean breeze,  freighters in the distance, the Olympic Mountains on full display. It doesn’t get much better. Getting back into my little 25 year old roadster, a young guy two spots over in a grey Mustang asks me about my car. Half an hour later we were car buddies, ex-Lower Mainland buddies, and Vic High buddies.

I love it when a conversation starts like that. A question, a friendly smile, and the next thing you know you’re just chattering away. I learned a lot from him. For starters, he’s a red seal mechanic in town and had some good advice about where to take my car for servicing. Various members of my family are car nuts, including my husband and son. So when he told me his Mustang had a Shelby-designed engine, the name actually meant something to me. And we had cars in common.

It turns out we’d both lived on the BC mainland, and we both agreed it was great to be back living in Victoria. Another experience in common.

I told him I’d grown up nearby, just a few blocks away. ‘I grew up in Fernwood,’ he replied. Aha! “Fernwood?” says I, wondering if he’d gone to Vic High, too. “So did you go to Vic High?” “Sure did,” he says. “I lived on Vining Street. It definitely didn’t take me long to get to school.” Bingo. Even more in common.

His interest in cars started in the shops at Central Middle School. Then it was on to Fairey Tech at Vic High. “Auto mechanics, autobody, woodworking, gym – all my favourite subjects,” he says. “Vic High is a great school. There’s just something about it.”

And so it went. Memories and laughs with another member of the Vic High tribe. I was probably old enough to be his grandmother, but our Vic High connection made short work of our age difference. I’d love to meet him again. He did tell me where he works. Maybe one day I’ll drop in, see if he’s there, just tell him how great it was to meet him, tell him I wrote this little story about meeting him. Will that be weird? I hope so. In a good way.

Thanks, Antonio, Vic High Class of 2018. You are the welcoming, accepting spirit of Vic High, and you totally made my day! 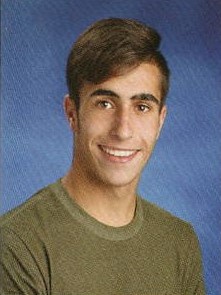