You are here: Home1 / Stories2 / The Great Key Caper 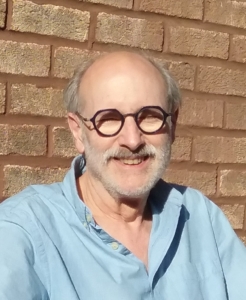 It was the 60s. Peace, love, and you know, that little green plant we can now grow legally.

And that’s where the Great Key Caper begins: the Stage Crew.

John Warren was in Grade 10 in 1963/64 and quickly joined the Stage Crew.  “I definitely didn’t want to act,” he says, “although Calamity Players was a lot of fun.” (More about his alter ego ‘Igor’ in a minute.)

“I stayed on the Stage Crew when I got to Grade 11,” he continues, “Jim Merrill was still the Stage Manager. One day he came to me and basically said, ‘I’m gonna quit school, so you can be Stage Manager now’. I thought quitting school was weird, but I was OK with stage managing.”

Apparently Jim had ‘the key’. A pass key. A key that could open any door in the school.

Stage crew students were always busy backstage. There isn’t much room in the wings of the Vic High auditorium stage, so they were always moving stuff up and down from the attic. Having to get the key all the time from Mr. Foxgord, the Stage Crew teacher sponsor, was a big nuisance to everybody. So Mr. Foxgord would loan Jim the key for hours at a time.

“And Jim,” John continues, “had gone to Cubbons at some point (on Cook Street, now Castle Building Supplies), and had a duplicate key made.”

John’s the guy on the right, apparently leading the way.

John hated homeroom, all the formalities and prayers and such, so he came up with lots of excuses to miss it. There was always something to do backstage so being on the Stage Crew gave him the perfect excuse. But having ‘the key’ also became a convenience for this very busy guy. Stage crew members did lots of other stuff around the school, too.

“The school opened at 8 am,” says John, “but some days I wanted to come in early so I did, and used the key to let myself in. I don’t think anybody knew I had it.”

The Philosophy Club. John’s on the right side, peeking out behind the teacher.

“I was up on the catwalk in the New Gym (Andrews Gym),” says John. “At one end there’s a short connection to the Old Gym. It was noon, and I was trying to get lights organized for the Friday night dance in the Old Gym. Mr. Price, the Gym teacher, was coaching a team in the New Gym and saw me using the key to go into the Old Gym.”

John didn’t really think about it or worry about it. Not even when one day in Mr. Hardie’s homeroom there was a PA announcement: ‘John Warren, come to the office.’ John didn’t know why, but off he went to see then Vice-Principal Mr. Lorimer.

(A few years earlier, some students had gotten into the school and thrown typewriters down the stairwell form the fourth floor.)

Mr. Lorimer:       You realize we’re going to have to change all the locks in the school.  At considerable expense.

“And that was it,” continues John. “No detentions, no writing lines or anything. Mr. Lorimer was quite matter-of-fact about the whole thing. Although the next year, Mr. Foxgord was no longer the Stage Crew sponsor.”

In fact, a few years later, when Mr. Lorimer was Vic High Principal, he asked John if he wanted to be a teacher’s aide. “So I guess I hadn’t messed up too much,” says John.

Life went on at Vic High and John remained the Stage Manager in Grade 12, sharing the work with his friend Dave Tubman. John especially loved still being in Calamity Players. “It was all about improv and ad libbing,” John says. “There was always a script, reviewed by (teacher) Tommy Mayne ahead of time, but we had a lot of freedom on stage, and we all loved it, the Players and the audience. We also all loved Tommy Mayne.”

John remembers one particular time in Grade 12 when the Calamity Players were asked to promote an upcoming Tyees game at a school assembly. “I had this idea for an ‘Igor’ character,” says John. “I came on stage, took the mic, and in my best Peter Lawrie/heavy breathing/foreign accent voice, told the students about the team and why they should go to the game. ‘Igor’ was a hit, and I had fun with the character for the rest of the year.”

John lives in Montreal now, although he came home in 2016 for the Class of 1966 50th Reunion and hopes to come back for more Vic High reunions and events. He’s still a joiner, volunteer-guiding visitors at the Château Ramezay Museum in Old Montreal and very active in Prostate Cancer Support there and nationally. (www.prostatecancersupport.ca)

“Vic High was just so unique,” says John. “There were programs not available elsewhere, like Orchestra and Band and Choir which you could take for credits. There were all the Shop (Fairey Tech) courses which academic kids took, too. Students could start a club if they could find a teacher sponsor. Sometimes I think we had more freedom back then. And Vic High students were out making a huge difference in the community, like starting Cool Aid and changing the world.”

Indeed. And it’s pretty certain they still are.

P.S. If you’re interested, here’s a link to the history of Cool-Aid, the Victoria society started by Vic High students in the 1960s,  that houses and supports the homeless and poor. It was written in 2009 by Vic High Alumni Board Member and local historian Helen (Kelley) Edwards, VHS 1964.

Note: John’s dad was Herb Warren, also a Vic High alumnus, who as Victoria Parks Superintendent was the father of the city’s famous hanging baskets. Read about him here. 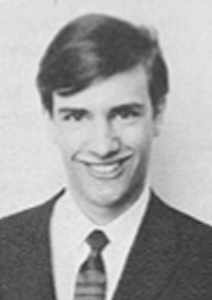 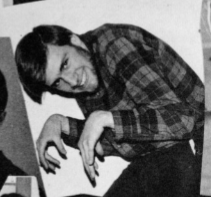 The Legend (or is it The Myth?)