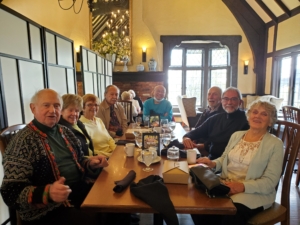 In his mid-80s, Stew Smith still regularly flies to Italy, Switzerland and Sudbury, Ontario, from his Princeton, New Jersey home to chair scientific group meetings. But his favourite flight is from Newark Liberty International Airport to his beloved Victoria and Victoria High School.

The Vic High Grad of 1955 and particle physicist who has spent half a century of learning, teaching and researching at Princeton University was finally able to return to his hometown in April this year after a three-year hiatus caused by the COVID virus. He was so happy to be back that he hosted a lunch which included three Vic High grads from 1955, David Anderson, Irene Harrison and himself, one from 1956, Wendy Simson and the “rookie” from 1958, King Lee. Also invited to the Fireside Grill lunch was former Vic High principal, Keith McCallion.

Stew also got in a visit to Vic High, albeit at the school’s temporary Topaz Campus at the old S. J. Willis Junior High School near Hillside Avenue and Blanshard Street while major seismic upgrading and renovations are going on at the Grant Street building. Physics teacher Jonathan Geehan sent current and former Astronomy students to the Vic High Alumni’s recorded interview with Stew, Grade 12 students Madison Levagood, Kieran Slade and Ayan Araleh, and Grade 11 students Aina Saitoh and George Sleen. Having benefitted from Stew’s $13,000 donation that launched Vic High’s Astronomy program, students were keen to hear more about their field of interest and clearly grateful for the opportunities it’s given them.

Stew, a big supporter of the Victoria High School Alumni Association, was obviously pleased to talk to the students and spent the better part of an hour sharing his thoughts and answering questions. Stew also met with Jonathan to discuss ways Stew, who was the top student in the province the year he graduated from Vic High, could assist with classroom needs in the ‘new’ Vic High set to reopen September 2023.

Stew has found a residence in Bend, Oregon, where he has family and is currently in discussions with his wife, Norma, about moving permanently to the West Coast. He said one reason why it is a difficult decision is that it would be much easier for him to fly directly to his meetings from New Jersey’s international airport than to find connecting flights from Seattle or San Francisco.

Then again, the Vic High Alumni and perhaps Physics teacher Jonathan Geehan would be more than happy to have Stew closer to Victoria, particularly if more students could benefit from his inspirational sharing of his knowledge and experiences.

A Few Shining Stars, Class of ’55
Scroll to top