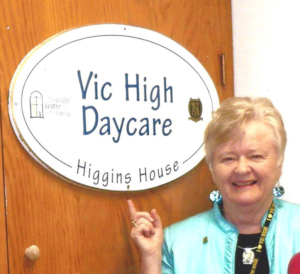 Between 1995 and 2010, Victoria High students with infants could access free day care on school grounds. Sharron Higgins was the driving force behind this program with major assistance from then-Principal Keith McCallion and counsellor Wendy Neumann. “I always thought education and health could work more closely,” said Sharron, a school nurse at Vic High at the time. “I felt it was my mission to work with educators.”

With financial and administrative help from the Cridge Centre for the Family (established in 1873), the provincial ministries of Social Services, Women’s Equality and Education, the Greater Victoria School District (#61) and Capital Regional District Health, the 10-crib day care facility was up and running in 1995 in joined portables in the area where Fairey Tech now stands. Quilts were donated by the Quilters Guild of Victoria. The Vic High daycare facility was named Higgins House to honour Sharron’s visionary leadership and work in developing the program.

Sharron, who retired in 2000 after 20 years as a school nurse (the last seven at Vic High), said ground-breaking ceremonies were held on June 22, 1994 and the official opening ceremonies were held Feb. 1, 1995. She recalled discussions started in June of 1992 when students confirmed that there was a need for day care at the school.

It was not the first school day care program in Greater Victoria, Sharron said. Belmont High School had a successful program up and running and served as a model for Sharron and her Vic High health committee. With no day care in the Fernwood area near Vic High, Sharron, Keith and Wendy began discussing solutions.

“We had a number of girls who were dropping out (of Vic High) because of pregnancy,” said Keith. “This led to them not graduating.” The three decided that an on-site daycare was the best solution for mother-students to attend class and care for their infants and toddlers at the same time.

Denis Harrigan, who followed Keith in the principal’s office, remembers that he loved to visit the infants and toddlers as a soon-to-be-grandfather practise. “As the program became successful in the late ‘90s, it also expanded and we accepted additional students and (their) infants from across the district,” Denis said. “Then the number of pregnancies decreased {I guess our Family Life program was working!).” Denis said the Cridge Centre for the Family eventually took over the service and accepted students’ infants and toddlers from any educational program, including University of Victoria and Camosun College.

Donna Jones of the Victoria High School Alumni Association and Vic High Class of 1957 , was a School District 61 trustee on the school board when the Vic High day care was evolving. She said it was common ground that there was a need. “People thought it was necessary to give the girls a hands-up,” she said.

In Higgins House’s admission policy, students wishing to use the holistic-approach day care service were required to attend a minimum of four hours of class each school day and “account for” at least 80 per cent school attendance.

Although Sharron did not attend Vic High, her late husband, Glendon, and eight others in her family are Vic High alumni. Her mother, Lauretta Holdridge, was one of the first female principals in Greater Victoria when she was appointed to the position at Braefoot Elementary.

Sharron has been a loyal supporter of the Vic High Alumni, particularly the Vic High Archives & Museum where the original Higgins House Daycare sign now lives.

We’ve Got the T-E-A-M
Scroll to top