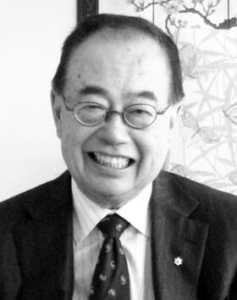 Ronald Lou-Poy, lawyer, volunteer, charity fundraiser, chancellor and strong but silent Victoria High School supporter, has died at the age of 88. Ron’s post-graduate connection to Vic High was mainly in the Lawrie Wallace era of Victoria High School Alumni Association’s rejuvenation. He was made an Honorary Member of the Association almost 30 years ago.

“He was always incredibly kind,” VHSAA Chair Roger Skillings recalled. Roger, whose connections to Ron were from the Alumni Association and through tennis, also used the words “thoughtful” and “generous” in describing Ron. Roger said that Ron offered legal advice to the Alumni Association which aided in the drafting of important documents in the Wallace era. Ron apparently helped Lawrie, who he revered, as a debt of gratitude for what the former teacher and provincial secretary did for Ron during his time at Vic High.

After Grade 12, Ron was destined to go to secretarial school and work at his family’s wholesale fruits and vegetables business. But Lawrie, who was Ron’s mentor and counsellor, saw the potential and paid one or two visits to the Lou-Poy family to urge Ron’s father, Harry, to send him to college or university. Ron attended Victoria College (forerunner of University of Victoria) and University of British Columbia, graduating with a Bachelor of Commerce degree in 1957 and a law degree in 1960. He articled at the Victoria law firm of Crease Harman & Company and rose to senior managing partner before retiring after 52 years. 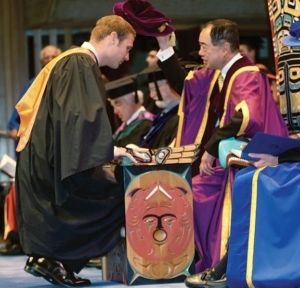 Ron was UVic’s ninth chancellor, serving two terms, and was awarded the Order of Canada for volunteerism in 2003. UVic President Kevin Hall said of his passing:

“Ronald Lou-Poy’s contributions to the university – in nurturing community connections and cultural bridges, always aligned with the values of service, justice and philanthropy – helped shape what UVic has become today. His passing is a great loss to us. And it’s also a reminder of the great impact that individuals can have on the world when they commit themselves to making the world a brighter place. Ronald Lou-Poy was a shining example of that spirit.”

“He was such an asset to Vic High,” said Keith McCallion, former principal and VHSAA chair. “He was always there when we were fundraising,” said friend Alan Lowe, former Victoria mayor and Vic High grad of 1979. Ron and his wife, May, were Alan’s guests at the inaugural VSHAA Black and Gold Dinner at the CFB Esquimalt Wardroom in 2014. Alan described his dinner guests as a “power couple” and said Ron was well-respected, very funny in his own way but he could also be very serious.

Anne McKeachie, the Black-and-Gold-dinner coordinator, described Ron as a sweet man, gentle and humble. “He totally supported us,” said Anne, whose other memory of Ron was at the 2006 renaming of the Vic High auditorium to the Lawrie Wallace Auditorium.

Ron is survived by his wife, May, and children Patrick and Anne Marie. Read his full obituary here. 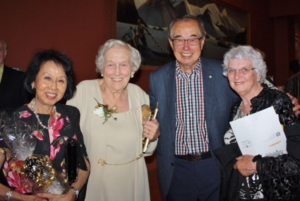