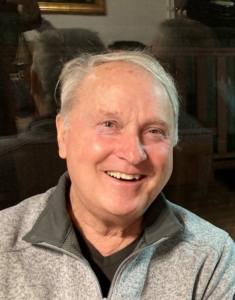 Roger has been involved with the Vic High Alumni since 1996, as a Director, Vice President, President, Active Member and regular Board Meeting attendee.  But his roots go back much further. His father was a Vic High grad in the 1920s, all his brothers and his sons and many of his grandkids and nieces and nephews all attended Vic High. It was inevitable that Roger got involved  in the Vic High Alumni, and that he has remained a loyal volunteer for 26 years and counting. Quite simply, he loves Vic High.

Roger has also helped recruit numerous alumni to active participation in Alumni initiatives, and has spent thousands of hours on many projects. Along with Keith McCallion, active Alumni member and former Vic High Principal, Roger has worked for more than 15 years  on the Stadium Revitalization project that accompanies the seismic upgrading of the school.

His leadership strengths became evident at Vic High when he served as school Prime Minister in 1968, and continued throughout his life as an active community volunteer, fundraiser, and administrator.

On May 3, 2021, the Board of the Greater Victoria Sports Hall of Fame announced its Class of 2021. Among the four inductees is former BC Games Society CEO and honourary Board Member, Roger Skillings.

Roger held his post as CEO of the BC Games from 1988 until the spring of 1999. During his tenure, he developed a model for sport hosting excellence which endures to this day. He fine tuned the community legacy policy, ensuring every BC Winter or BC Summer Games saw a return on their Games hosting – translating into wide-spread benefit that is seen and felt in past-host communities to this day. He also expanded the Society’s delivery of professional services to the BC Senior Games, Northern BC Games and BC Games for the Physically Disabled.

Beyond the BC Games, Roger’s visionary thinking helped build Victoria into an Olympic training hub as President and CEO of the Commonwealth Centre for Sport Development, which became PacificSport, and later the CEO of Canadian Sport Centre Pacific.

While successful athletes and coaches are rewarded with medals and headlines, Roger Skillings was quite happy to go about his work anonymously, humbly building the framework of BC Winter and BC Summer Games on which those athletes and coaches would build. He remains on the BC Games Society Board of Director as an Honourary Board Member.