Kent Wong, who achieved the title of Master of Photographic Arts in 2008, credits former Victoria High School teacher Bruce Chan with pointing him in the right career direction. Now 14 years later, Kent has received a rare honour from the Professional Photographers of Canada, BC Region. In November this year, Kent joined five others in an exclusive group in the organization’s  77-year history, bestowed with the prestigious title of Associateship. The award is given for service in an executive capacity and recognizes exemplary service to the organization.

Kent’s introduction to photography began at a young age with a fold-out camera owned by his parents, who still live in their home on Chambers Street near Vic High. Kent lives in Kamloops but travels to Victoria often, six times so far this year. He attended George Jay Elementary, Central Junior High and Vic High, where he joined the Photography Club sponsored by teacher Bruce Chan. Despite their 14-year age gap they became friends, and “we ended up spending time together,” Kent said. Bruce eventually left teaching and became a well-known Victoria landscaper.

“(The photo darkroom is) where I spent most of my time,” Kent admitted. The club had eight members, Kent remembered, and one of them was neighbour Kelvin Chan (no relation to the teacher), who shared with Kent the darkroom work needed before digital photography was even invented. Kent, Photography Club president in Grade 12, and Kelvin ended up doing most of the photographic work in their class’s 1971 Camosun yearbook. Despite that, he still managed to maintain an A-minus or B-plus grade average. 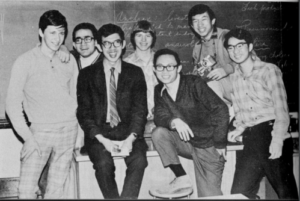 Kent totally enjoyed his formative years at Vic High, recalling teacher Lawrence Owen’s piano music and Iron Butterfly’s “In-A-Gadda-Da-Vida” echoing through the Vic High hallways from the auditorium. Kent is also pretty good on his feet, forming the Kamloops Dance Club and teaching ballroom dancing over the years. In fact, his first girlfriend at Vic High was his square dance partner Donna Pollard. He also enjoyed camping on Saltspring Island with the Outdoor Club and biology teacher Barry Camp. Kent also remembers seeing Chilliwack perform in the gym, and being allowed to write exams even though he hadn’t had much class time due to all his photography work at school.

During Kent’s first year at the University of Victoria, former teacher Bruce gave Kent a tip about a wedding photo job – he thinks he charged $90 for the shoot – and it was his introduction to photography as a career. Because he had to declare his income for tax purposes, Kent formed Kent Wong Photography. 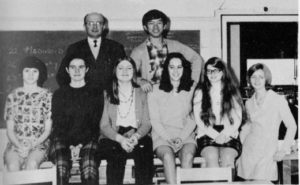 Kent was also a member of the Outdoor Club. Looks like he was the only guy in the club!

After leaving Vic High in 1971, Kent graduated from UVic with a Bachelor of Science degree in neuropsychology and vertebrate physiology, but not before failing twice to get into medical school.

In 1979, he went to work in Victoria as a data clerk at the provincial Ministry of Environment, pollution control branch and continued his photography. After applying  for and getting the position of Pollution Control Technician, he was posted to Kamloops in 1980, eventually leaving the provincial government to devote his full time to photography. Kent Wong Photography has grown to the point where Kent was voted Kamloops’ best photographer 16 times and was awarded the Queen Elizabeth II Diamond Jubilee Medal in 2012.

In 2012, Kent travelled to Metchosin from Kamloops for a photo session with Vic High teacher and friend, Bruce Chan and wife Darlene and their family, a beautiful thank you from student to teacher for showing him the way. 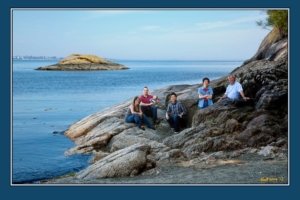