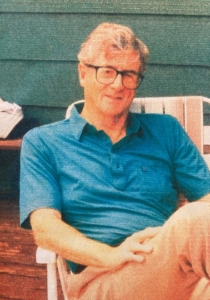 Bob Grundison, VHS 1947, who eulogized his boyhood friend at the Victoria Golf Club after 74-year-old Dr. Salmon died on Oct. 11, 2003, remembers fondly their carefree youth living in Fairfield, Salmon also living at one time on Blanshard Street across from where the current courthouse now stands. He also remembers the two of them having Victoria Times afternoon paper routes together.

One of his recollections at the eulogy was of the two of them aboard a wagon, careening westward down the Burdett Street hill from Blanshard Street almost to the Empress Hotel.

Dr. Grundison, retired from his Colwood optometry practice, even remembers attending the basketball game at the Vic High gym in 1946 when the Victoria Dominos upset the Harlem Globetrotters.

Peter Alexander Salmon was born in Victoria on Aug. 5, 1929, and he and Dr. Grundison attended Beacon Hill Elementary School from grades 1 to 3 and South Park Elementary School from grades 4 to 8 before entering Vic High in Grade 9. Dr. Salmon was 10 years old when he began swimming competitively and his first mentor was Victoria’s legendary swimming coach – and eventual B.C. sports hall-of-famer – Archie McKinnon. 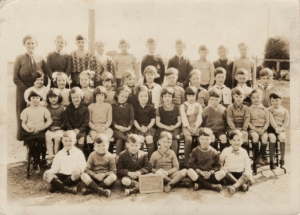 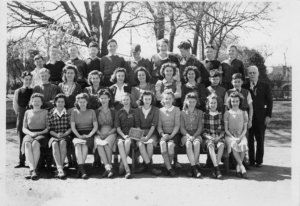 Along the way, Dr. Salmon set 16 Canadian swimming records, was the only Canadian swimmer to win gold at the 1950 British Empire (now Commonwealth) Games in Auckland, New Zealand, was selected as a National Collegiate Athletic Association All-American swimmer in 1951 while attending the University of Washington in Seattle, and represented Canada at the 1948 Summer Olympics in London (where he garnered a bronze medal) and the 1952 Summer Olympics in Helsinki, Finland. 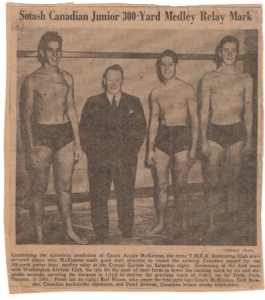 In between Olympics, Dr. Salmon set an NCAA record in 1951 for the 50-yard freestyle, a record which stood for more than four decades. He also became the first Canadian to win a U.S. national collegiate title in the 150-yard individual relay.

“He never broke any records with marks,” Dr. Grundison said with a twinkle in his eye and a wry smile. But Dr. Salmon’s academic accomplishments in the field of medicine tell a different story.

After retiring from his academic and research careers, Dr. Salmon opened up a practice in Eugene, Oregon, where his widow, Janet, still resides. He operated his practice from 1995 to 1999.