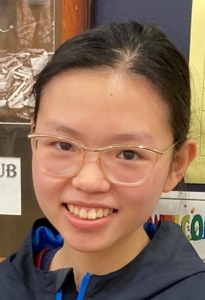 Maia Looi was back at Vic High recently, accepting her Governor General’s award from Principal Aaron Parker as the top academic student at Vic High for 2021-22. As such, she also received the Vic High Alumni-funded Peter Smith Centennial Award of $1000 and her name will be added to the list of top academic students on permanent display at the school.

Maia’s main interest while at Vic High was computer science, so it’s perhaps no surprise she’s enrolled in a five-year Computer Engineering program at Waterloo University. “I’d like to end up in network security,” says Maia, “because it’s a chance to really affect how the world works.”

Waterloo’s Co-op program, the largest of its kind in North America, involves students alternating every four months between studies and paid work experiences. “It’s a key reason I was interested in Waterloo,” says Maia. “Students get the chance to help pay off their tuition, plus 90% of students in the program get offers to return to one of the places they did work experience.” 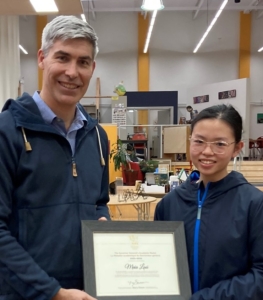 Over half Maia’s time at Vic High coincided with the COVID pandemic which dramatically altered how students gathered and learned. But it seems Vic High was able to pivot, maybe better than most, and continue to deliver its flexible, individualized approach to learning. At least that’s how Maia sees it. “The teaching staff at Vic High are really understanding,” says Maia. “They really support students’ different learning styles, and taught us how to learn, not just facts. It allowed me to grow as a person.”

Maia starts her first Co-op stint January 9 in Vancouver in a full-time software engineering position. “Waterloo has a huge network of partners,” says Maia, “and you apply and are screened and interviewed and hopefully hired, just like any other job. We don’t take summers off in the Co-op program, and have to do six paid Co-op work terms, so it extends the program by a year. But it’s definitely worth it.”

The Peter Smith Centennial Award is funded annually through a Vancouver Foundation investment made by the Vic High Alumni with funds generated at the 1976 Vic High Centennial Celebrations. 2026 marks the school’s 150th anniversary, and the Alumni is already planning a second Vic High history book and celebrations to mark the occasion.