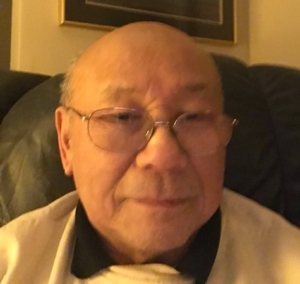 Choosing journalism at Vic High because it was easy led Vic High Alumni volunteer King Lee to a 33 year career at the (now) Times Colonist. Assigned by his teacher,  Stan Murphy, as a “stringer” delivering high school sports scores to the paper, he began working there as a sports reporter, then spent 26 years in the News Department.

King played table tennis at Vic High, then bowled 5-pin to a national level. He also took up curling because his Sports Editor Jim Tang told him to, and has been curling ever since. “I can’t wait for the vaccination clinic at Esquimalt Rec to be over so we can get back to curling,” says King. He also plays contract bridge regularly, and volunteers for the Greater Victoria Sports Awards.

“I love volunteering with the Alumni,” says King, who joined the Alumni team around 2010, “mainly because the people are so great. Everybody puts their full heart into it.” Among other things, he writes stories for the Alumni newsletter, helps draft scripts for videos that honour each inductee at the Alumni’s Black & Gold dinner, and is helping gather stories for the Vic High 1976-2026 history book.

After retirement, King became good friends with celebrated sportswriter and Black & Gold Inductee Jim Taylor, VHS 1955. “I took him to Vic High one day,” he recalls, “to meet with students in his field and share some tips.” One that Jim shared was new to King. “He said, ‘Don’t do interviews. Do conversations.’, says King. “It really changed things for me, and it’s how I approach my Alumni volunteer writing.”

In 2008, on the occasion of his grad class’s 50th reunion, he wrote a heartfelt column for Black Press. He shares it with us now, plus the curious autograph his good friend Howard Lim penned in King’s 1958 Camosun. (If Lim’s Camosun message isn’t legible enough, read it here in the Howard Lim article his friend Gordon Eekman, VHS 1958, submitted to the newsletter.)

In 2014, Carolyn Wong’s brutally-honest and award-winning film about her uncle Howard Lim was shown in Victoria. It was presented to a standing-room-only crowd at the Eric Pavilion Theatre after receiving accolades at the Vancouver Asian Film Festival (Best Canadian Short Award) and Cleveland International Film Festival (Best LGBT Short Film Award – Honourable Mention) in 2013. King and Alumni volunteer Roger Skillings attended the showing, and definitely attest to the standing-room-only crowd. You can view the film, simply titled ‘Howard’, here. 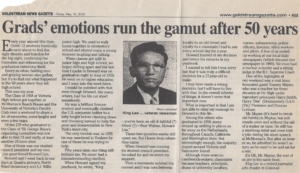 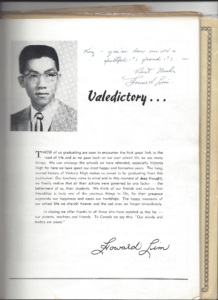