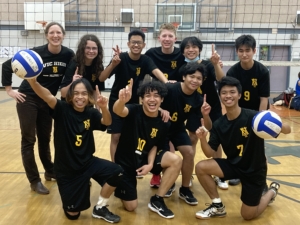 Winning is one thing, but winning with class and true sportsmanship was the big accomplishment for this year’s Vic High junior boys volleyball team. The team posted a 26-1 (matches), 49-3 (sets) season record, winning in league, Lower Vancouver Island, and Island championships.

Along the way, coach Bethany Murphy said, the Vic High team drew compliments from rival coaches, referees, and parents for their display of sportsmanship and fair play. One rival parent even put it in writing, praising the coach for the behaviour shown by the Vic High team, which exemplified class, grace and what a true champion should be. The parent said the Vic High team even shagged (retrieved) balls for the opponents during warmups, something the parent had not seen before.  See below for full text of the rival parent’s comments.

“I can’t take credit for that,” Ms. Murphy quickly interjected, trying to downplay the complimentary remarks by saying her players had that kind of open and helpful impulse at the start of the season. Ms. Murphy, who attended the University of Maryland on a full-ride volleyball scholarship, took over coaching duties from teacher Roger Duval, who continued coaching the senior boys team. She said she did not instill the sportsmanship, but rather inherited it from the boys’ previous coaches and the nature of the close-knit team. Six team members are good friends.

The volleyball program at Vic High is very popular, with high participation from the student body, resulting in three girls’ teams being formed this school year. 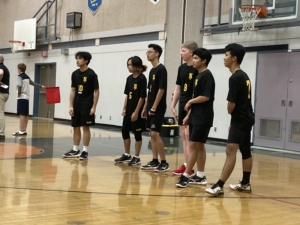 A problematic choice may be looming on the horizon for Ms. Murphy, though, who volunteers her services to Vic High’s volleyball program as a community coach. Next season, her son, Andrew Janz, moves into Grade 10 at Vic High and his sophomore year on the volleyball team. Her daughter, Hannah Janz, will be entering Grade 9 and the volleyball program at the school. But for now, she is enjoying the results of an outstanding season for her team.

Two players, André Moneda and Rainier Gomez, were called up to play as part of the starting six with the senior team. Moneda was selected Most Valuable Player at the Island Championships, and Eighan Entac was named to the Island All-Star Team. In late November, the team went to the Coastal Championships tournament in Langley, a regional alternative to the provincial tournament, which was to be held in Kelowna but cancelled due to storm damage. They came second in pool play but didn’t make it past the opening round of playoffs.

Ms. Murphy said the team even demonstrated their usual friendliness by warming up with the opposition.

The Vic High team may not have previously experienced the calibre of play at this year’s  championship tournament. But Ms. Murphy knows the team is motivated to build on this year’s successes and challenges. With such extraordinary sportsmanship and so many wins, the Vic High junior boys’ volleyball team will surely set their sights high for the future, and alumni will be cheering them on.

Text of comments sent by a rival parent

I just wanted to pass on my congratulations to the jr. boys volleyball team for winning the city championships on Friday night. My son was on the opposing team in the final against them. What I was most impressed with was the class that Vic High showed in that championship game. They celebrated their points appropriately -didn’t-over celebrate or rub it in their opponent’s faces. They complimented the other team when they did a good play, and what was most impressive was during the warm-up, they shagged (retrieved) balls for the other team during their time to spike.

I had not seen any team do this and so I thought that was excellent sportsmanship. Clearly this direction came from the top. Compliments to the coaches for leading a team that exemplified class and grace and what a true champion is. Everyone in the gym knew that Vic High should win that game as the other team was the underdog the whole tournament. But because of the way they won, my son was able to go home with dignity rather than feeling like they got smoked. I also think it is fantastic that the head coach is female! Great to see this.

I wish Vic High all the best at the Islands this coming weekend.