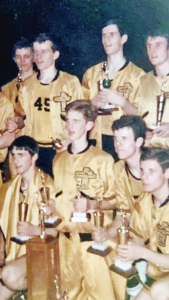 Gord Hoshal, who was part of B.C.’s version of Hoosiers in high school basketball, died this week at 69 of cancer. He later went on to play for the University of Victoria as an all-star in Canada West and coached several teams around the capital, including the Camosun College Chargers.

The Vic High Totems were a basketball dynasty in the 1950s and 1960s but their last of four provincial championships came as a longshot underdog in 1969 in one of the biggest upsets in B.C. high school history.

Barrie Moen, Dave Mulcahy and six-foot-four forward Hoshal were the key players of the Totems’ team that edged the top-ranked Oak Bay Bays 38-37 in overtime in the all-Island 1969 provincial final with Hoshal scoring the two winning free throws. The defending 1968-champion Bays, led by centre Tom Holmes and coached by the legendary Gary Taylor, had a 32-game winning streak over two seasons going into the championship game and had beaten coach Porky Andrews’ Vic High squad handily in three previous meetings that season.

It was the first high school basketball championship game played at the Pacific Coliseum, attracting more than 8,000 fans, after decades of the B.C. tournament being held in UBC War Memorial Gym.

“The next day we had to take the same bus to the ferry as the Oak Bay team, us in the front holding our trophies, and them in the back. How sweet was that?”

Hoshal and fellow Totems co-captain Eric Earl rode in the Victoria Day Parade that May in the back of a convertible and holding aloft the B.C. championship trophy.

Hoshal and Mulcahy later played together with their Oak Bay rival Holmes at UVic, with Taylor on the Vikes bench coaching. Hoshal averaged 14.7 points and was named Canada West first-team all-star in 1971-72. He finished with an 11.7 points-per-game average in his three-season UVic career.

“Gord was one of the first UVic players to receive first-team Canada West honours,” noted Mulcahy.

Hoshal’s offensive prowess earned him the nickname Doc because teammates labelled him a local Julius Erving.

Hoshal went on after UVic to become a standout Senior A player with the Victoria Data Tech and Scorpions teams that won B.C. and Western Canadian championships and were Canadian runners-up, dispatching the likes of Olympian Phil Tollestrup of Lethbridge along the way, and also routinely beating former University of Washington Huskies and Washington State Cougars players in games across the border against AAU teams.

Hoshal’s coaching tenures included Camosun College twice, with co-coach and former national team player and Seattle SuperSonics draft pick Bob Burrows from 1998 to 2002, and national top-10 ranked Chargers teams with co-coach Gord Thatcher from 2003 to 2005. Hoshal took the Mount Douglas Rams to the B.C. high school tournament twice as head coach and co-coach between 1993 and 1997. Hoshal was also part of numerous hoops clinics across the Island.

“He was a players’ coach and the players loved him,” said Thatcher, who coached Camosun College from 2002 to 2008.

“As a former player, he had great insight into the game, especially the offensive end.”

Having been a student-athlete before becoming a clothier and later realtor, Hoshal knew the Camosun players had little money.

“We had won a Christmas break tournament in Medicine Hat and it was minus-40 with wind chill and we wanted to do something special for the players after the game on New Year’s Eve so we took them to The Keg. Gord picked up the tab. He was that kind of guy.”

Mulcahy summed up a basketball life: “We were basketball gypsies. Decades of road trips and playing games, years of coaching, Gord loved and lived the game.”