You are here: Home1 / About Us Profiles2 / Fred Packford, VHS 1949 Vic High All His Adult LIfe 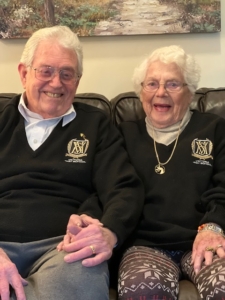 He started at Oaklands Elementary, then went on to Central Junior High School. But it was his Vic High days that really got into his DNA. “Through my Vic High years,” says Fred, “we started one period early – at 8.15 – to take tech classes and still earn university entrance qualifications.” That interest became the foundation of his years of teaching at Vic High. “I really matured from a boy to a man at Vic High,” continues Fred, “and made many new friends who stayed with me for life. Our Grad class was very involved in school activities, like working with the Memorial Committee canvassing for donations for the new Memorial Stadium. But I had no afterschool activities. After class I went straight to Safeway for 3 hours work.”

In 1954 he took a chance on a blind date and met the love of his life. Doreen Dalziel graduated from Vic High in 1946. They were married April 6, 1956. That year Fred spent the entire summer at Vic High working with a crew replacing the school’s air conditioning recirculation system. Sixty-eight years together, their 66th anniversary in 2022, Fred and Doreen are still going strong. Doreen’s brother Bob had been a year ahead of Fred at Vic High, graduating in 1948, and her mother graduated from Vic High in the 1920s. Fred’s siblings were at Vic High during the Depression. “Only Alec graduated,” says Fred, “probably about 1937. All the rest had to try to get jobs to support the family. They all eventually became skilled tradesmen.”

Fred’s sheet metal teaching stint at Vic High led to an invitation in 1960 to return to university for a Bachelor of Education Secondary Teaching Certificate. For the next 10 years, while working part time on his degree and graduating in 1970, Fred taught a variety of subjects, starting at Gulf Islands Secondary School on Salt Spring Island and then Victoria’s Lansdowne Junior High School. Along with shop classes, he taught math and Grade 8 girls’ guidance at Gulf Islands Secondary. “We spent a happy year working together in the shop while the Home Economics teacher taught the girls the guidance curriculum,” says Fred. 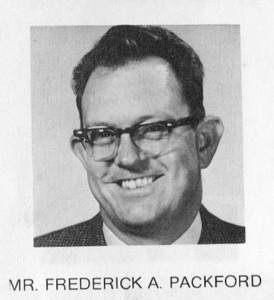 After five years at Lansdowne, Fred was drafted back to Vic High in 1967 to teach the metal fabrication trade at Fairey Tech. He was there for the next 22 years, which also included a stint of three years teaching Social Studies 11 to the Fairey Tech students. “I had earned a double major in Industrial Education, eventually teaching every subject but automotive, a major in Canadian History, and a teaching minor in counselling during my 10 years at university,” says Fred. At one point Fred was drafted back to Fairey Tech full time – no more Social Studies 11 teaching – to develop and teach a fibreglass boat building class. “We built canoes, dinghies – including a sailing fleet for the school, kayaks, and I taught boat repair,” says Fred. “This was a good fit with the metal fabrication program, so we had a very busy fabrication program going for about 12 years.  Many of my students went to work in the metal fabrication and marine industry after graduation.”

Fred may not have had time for extracurricular activities while a student at Vic High, but he more than made up for it during his teaching years. He was co-sponsor of the Vic High Weightlifting Club for 15 years and built a lot of the club’s equipment in the shops with help from club members. From 1970 onwards he was Manager/Coach with Bruce Summers of the Vic High Competitive Swim Team, which won the BC Provincial Swim Championships in 1977. Fred stayed involved with school athletic programs his entire teaching life at Vic High, working to improve and help where he could. After the 1976 Vic High Centennial Celebrations Fred joined the Centennial Committee formed to manage the revenue generated from the Celebrations to support students at Vic High. Scholarships and bursaries were created, which remain to this day the foundation of the Vic High Alumni’s almost $500k invested in the Victoria and Vancouver Foundations to generate $18k in annual awards to Vic High students.

Fred and Doreen had three children, Barbara, VHS 1977, Ted, VHS 1979, and Ken, VHS 1982. They have each gone on to a successful life as skilled professionals. “Barb and Ted both won the prestigious Vic High ‘V’,” says Fred. “Barb married Greg Stone, VHS 1971, son of a 1949 classmate of mine. We have five grandchildren, and two great-grandchildren, with more promised!” “In 1991, the year I retired from teaching,” continues Fred, “I introduced the concept of a revived Vic High Alumni, including selling $10 life memberships to replace the Centennial Committee whose funds were no longer generating enough income to support Alumni activities. I figured 500 subscriptions would produce the needed revenue. Laurie Wallace said ‘If you think this is such a good idea, Packford, get out there and make it happen,’ “ remembers Fred. “So I did. Mr. Wallace and I had a history together from his teaching years at Vic High. So for the next 5 plus years,” says Fred, “[my wife] Doreen and I attended every Vic High reunion promoting Alumni memberships to the returning grads. We must have been successful for the result after 30 years speaks for itself.”

Fred refused Chairmanship of the Vic High Alumni when Laurie suggested it, due to personal commitments.  But he and Doreen stayed actively involved in every aspect of the Alumni until recently years when they stepped back. Their support, encouragement, wisdom and guidance remain vital to the current leadership of the Alumni, and there’s always lots of smiles and happy times when Fred and Doreen attend a meeting or join the Christmas social. “I’ve looked around the meeting table at times,” says Fred, “and realized I was the only old hand left. Lawrie Wallace, Duncan Lorimer, Reg Reid and others have all left us.” We may not see those folks now, but we’re pretty sure their guiding hands and their Vic High spirit, just like Fred and Doreen Packford’s, is always there around the Alumni table. “It seems I have been involved with Victoria High School all my adult life,” smiles Fred. “And Doreen has been working right beside me through all my Vic High years.”

We can’t begin to measure the impact this wise and dedicated man has had on generations of Vic High students – while a student himself, as a teacher and coach, and as a volunteer helping re-energize the Vic High Alumni and grow its scholarship and bursary award investments to continue to benefit students in the future. We just know for certain he’s Vic High – through and through. And we’re grateful.