You are here: Home1 / Stories2 / Fred Dobbs, VHS 1977 From Student to World-Class Sculptor 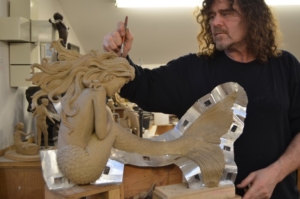 Fred always wanted to be an artist. A key memory for him was when he was 5, growing up in Ireland, and his dad taking him and his family to the beach. There his dad covered him seated waist deep in the sand and built an open top sand race car around him. Fred remembers thinking ‘Wow, you can make stuff out of other stuff.’

At Vic High, Fred was supposed to graduate in 1976 but failed English, not realizing it was a core subject needed to graduate. When he returned in 1977 to complete English 12, Art teacher Michael Hemming set up a personalized schedule to enable him to attend four art classes. He studied graphic design, silk screening and basic sculpting, including the additive method (starting with an armature and adding material to it) and subtractive method (starting with a block like wood and carving away until you get your piece). Fred was also on the Volleyball team and restarted the Gymnastics program. Vic High had the equipment but not the class or team. But Fred was a serious gymnast and competed in the BC Games.

His fondest memories of Vic High were the comradery of the teams and being able to immerse himself in the Arts program. As he always wanted to be an artist, he considers the interest and ‘nudging’ of Mr. Hemming as a stepping stone to fulfilling his dream. After Vic High, Fred went to Camosun College for their Graphic Design and Commercial Artist programs as well as a signwriting course.

In the early 80’s, while listening to a radio station in Vancouver, he got wind of a sand sculpting competition in White Rock, BC. After assembling a core group of willing participants, it was off to the races with a team called Freddie and the Sandblasters which began making waves in the sand sculpting community along the Pacific coast from Parksville, BC to San Diego, California. The team scored big wins at the US Open, the Canadian Championships, and the first World Team Championships at Harrison Hot Springs. 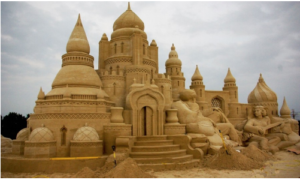 At Harrison Hot Springs in the early 90’s, team Freddie and the Sandblasters, along with rivals Totally in Sand joined forces to create a sand sculpting world record for height in a 100 hour event, which was recognized by Guinness World Records. 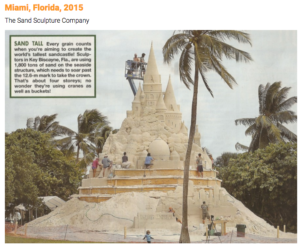 For the next 20 years, Fred travelled the world as a professional sand sculptor. It was a great way to see the world, as he sculpted throughout Canada, the United States, Australia, Germany, Romania, Kuwait, South Korea, Taiwan, Japan, Haiti, and the Bahamas.  In Kuwait, he worked with 74 other sculptors on a sand sculpture project the size of four football fields. He has also worked for major companies like Disney, Warner Brothers and Hanna-Barbera Productions.

Fred found the work extremely inspiring, especially working alongside and with sand sculptors from around the world. Many of these sculptors studied architecture and anatomy and their knowledge showed in their designs. Fred says that the talent pool and skill level for sculptors is rising sharply, especially due to Russian, Japanese and European artists. From his fellow sculptors Fred learned about different techniques, specialized tools, and the importance of knowing your subject matter. He tells the tale of trying to sand sculpt a Lipizzaner stallion, using a white Barbie doll horse as a model.  He was quickly informed that the Barbie doll horse was an Arabian, not a Lipizzaner, and learned that there is indeed a difference in body structure between breeds. However, years later he was invited to Kuwait to sculpt Arabian horses, and he remembered the lines of his Barbie doll horse. 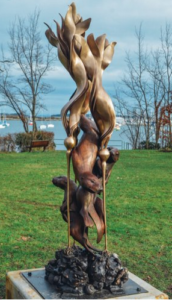 While the job of sand sculpting around the world is artistically fulfilling, it does mean a lot of travelling – over 200 days away from home some years and a lot of that in the sky flying to destinations. The pandemic drastically slowed down sand sculpting, but Fred still keeps his hand in the discipline. The past four years he has worked with Royal Caribbean Cruise Lines, going to their private islands in the Bahamas where their ships dock, and sculpting while on display. As he says, “I’m paid to play in the sand.”

From sand sculpting, Fred studied with well-known Victoria sculptor Peggy Walton Packard (who sculpted the bronze bust of Queen Elizabeth that resided in Beacon Hill Park for years), and Linda Lindsay (who has two beautiful bronze sculptures in Oak Bay). Fred also worked with Renaissance Studios and ArtForm Sculpting Studios under the direction of Derek Rowe, creating concrete sculptures and architectural components and learning the skills of mold-making and casting concrete. The resulting sculptural works now adorn Victoria buildings like Shoal Point and the Aria. 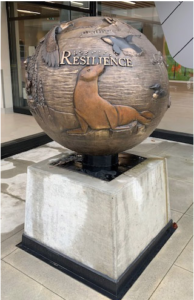 Fred moved on to working with bronze alongside Nathan Scott at South Island Bronze foundry in Victoria, learning the disciplines of cire perdue, the lost wax process of bronze casting, as well as welding and finishing patinas on bronze sculptures. He notes that a piece like Ocean in Motion (shown above) consists of a total of 20+ pieces: each of the three Sea otters was cast in three sections, along with the numerous sections for the bull kelp and base, that all needed to be welded together and chased to a fine finish in preparation for the coloured patina. He took a course in patination from Patrick Kipper in Colorado – considered one of the master antique patinators in the world.

Some of Fred’s sculptures can be seen in and around Greater Victoria, notably: Camossung at the Gorge Waterway Park in Saanich, Lunar Transitions outside the Oak Bay Library, a collaborative effort with Nathan Scott called The Sleeping Giants on the lawns of the Oak Bay Municipal Hall, as well as the Pacific Sea Otter plaque in Beacon Park, Sidney, BC.

Fred recently moved from Victoria to Mayne Island and is busy setting up his studio. Mainly working in cold cast bronze, which has similar attributes of pure bronze, but without the weight and need for high heat to melt the bronze to cast.  He’s busy working on new designs, which will surely pop up around Victoria soon. 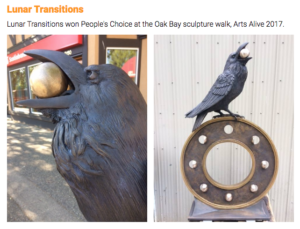 Fred offers these parting words… “A friend once told me, ‘No knowledge is ever truly wasted, moreover it is compiled, layer upon layer over years of immersion in a given field.’ ” Passion for what you do and a great interest, plus someone believing in your talent, can lead to a wonderful career and life. Vic High’s art teacher Michael Hemming believed in Fred and it made a difference.

Brian Dance, VHS 1966, The Totem Who Covered the Sports World
Scroll to top