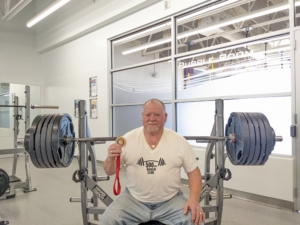 Friday January 13, 2023 will be a very lucky day for VHS alumnus Colin Bonneau, aka ‘The Organist With Pipes’ when Strathcona County, Alberta honours him with his photo on the Millennium Place Sports Wall of Recognition for outstanding achievement in sport. The honours happen only every five years, and we’re pretty sure Colin is the only church organist/powerlifter to receive the honour. Colin began training with a friend from his choir in 1998, “I was always pretty strong,” he says. He soon found his strength and discipline led to him eventually setting and breaking over 90 powerlifting records worldwide. His best bench press lift was at age 60 – 535 pounds! “I initially thought, ‘let’s see where this goes’, and ended up succeeding beyond my wildest dreams!” Not bad for a guy who considers powerlifting ‘just a hobby’.

Powerlifting was not a thing when he attended Vic High, though he did participate in the broad (long) jump and the 100 and 200 yard relays, and played wing with the Titans Rugby team, proudly wearing his block V. But music was and to this day remains his passion. “I played trumpet at Central Junior High under Mr. Grant, and I have fond memories of playing euphonium at Vic High under Mr. Sample, says Colin. He also played viola in the orchestra and the Greater Victoria Junior Symphony under Violet DeLong, and wrote some incidental music for a small string ensemble for the school play The Neighbours under Mr. Dulmage.

“I enjoyed almost all my teachers,” Colin goes on, “Mr. Wing throwing chalk at daydreamers, Mr. Evans, Mrs. Snead, Mr. Price, and of course Tommy Mayne. I blame my addiction to puns on him!  I also learned the value of working with and as a team. I enjoyed our class reunions, the 100th anniversary [of the building] in 2014, and look forward to our 60th class reunion…I hope!” 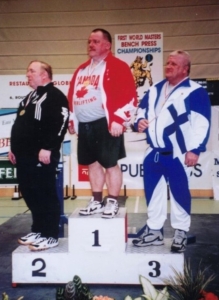 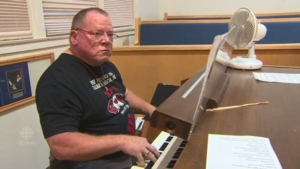 After graduating from UVic in 1973, Colin taught school in Ladysmith, Port McNeil, and Victoria, before moving in 1982 to Sherwood Park, Alberta where he met and married his second wife. “32 years of wedded bliss! He worked until retirement in 2011 as a band teacher in Edmonton Separate and Edmonton Public schools. From 1983 to the present, he’s been pianist, organist and music director at various churches, currently St. David’s United Church in Leduc, Alberta. “I took piano lessons in Victoria from Eric Edwards, father of Vaughn Edwards, and from well-known jazz pianist George Essihos,” says Colin, “and I recall playing in Victoria at Fairfield  United Church and St. Luke’s Anglican Church, in Langford at Gordon United Church, and at Brechin United Church in Nanaimo.” He also plays tuba in the Mission Hill Brass Band and in his own brass quintet- the Beaverhill Brass Quintet – and is on call to play The Last Post on the bugle.

A man of many, many talents. We salute you, Colin Bonneau (yes, he’s the older brother of Marv Bonneau, VHS 1968), and congratulate you on all your successes.

Note: Here’s a CBC article and video about Colin.

’59 Totems to be Enshrined at Vic High
Scroll to top