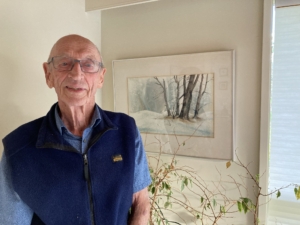 Bob Grundison followed his childhood friend Pete Salmon into the academic program at Vic High, as good a reason as any, you might say, for a career path choice. And he was quick a few months ago to suggest we profile his lifelong friend Salmon and Salmon’s careers and accomplishments in our monthly e-newsletter. See story here.

But Bob definitely made the most of that early decision, earning degrees in Math and Physics at UBC after graduating from Vic High. He then took a year’s Teacher Training and taught Grade 8 Science and Math in North Vancouver for a year. But something else beckoned, so he headed to Oregon for more education and certification as an Optometrist. That career stuck. In fact, it lasted 54 years, and included Bob being named Optometrist of the Year by the B.C. Association of Optometrists in 2007.

Once a teacher, always a teacher, Bob combined his educational experience with his optometric training to help children overcome reading problems through vision therapy. And as the son of a shipbuilder, he’d learned that craft and built his family a 26’ sailboat, the Owl, which he and his family sailed for many years in the waters off Victoria.

Bob retired from his Victoria practice about ten years ago, although he did have one in Colwood and Sidney years ago, and says most of his career he practised in Victoria with some great partners. 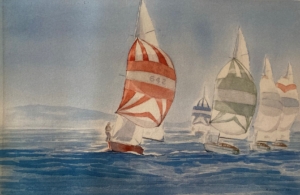 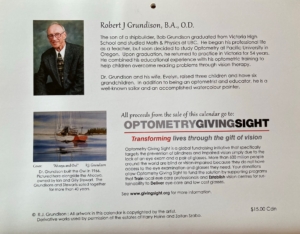