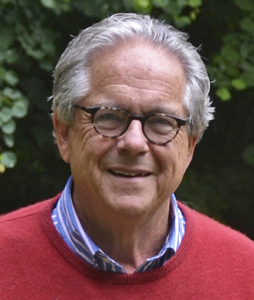 May 26 2022, Dr. Barry Gough, former Victoria High School teacher and Vic High Alumni Board Chair, local historian and author, and distinguished alumni of the University of Victoria was presented with The Admirals’ Medal at a Naval Association of Canada luncheon at the Royal Victoria Yacht Club. The award honours Barry’s contribution to maritime studies and his lifetime achievement as a global maritime and naval historian. Gough is considered one of Canada’s premier historians and biographers, and his insightful research and lucid writing spanning five decades have earned him high distinction and many awards.

Established in 1985 in conjunction with the 75th anniversary of the Naval Service of Canada, the Admirals’ Medal is bestowed upon individual Canadians in recognition of their outstanding achievements in the advancement of maritime affairs in Canada. Named for two Rear-Admirals, George Stephens and Victor Brodeur, and Vice-Admiral Rollo Mainguy, the silver medal is awarded annually for outstanding achievement in the areas of maritime-related science, technology and academic studies or for the application of practical maritime skills warranting special recognition. Barry Gough is the 35th recipient. 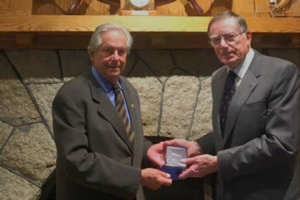 Former Chief of the Defence Staff and Commander of the RCN, retired admiral John Anderson made the presentation along with Jan Dent of the Admirals’ Medal Foundation, with the citation:

“Dr Barry M. Gough is Professor Emeritus of History at Wilfrid Laurier University and Fellow of the Royal Historical Society, with additional affiliations including Past President of the Canadian Nautical Research Society and of the British Columbia Historical Federation, founding member of the Association for Canadian Studies in the United States, and Archives By-Fellow Churchill College Cambridge UK.  He is recognized for his lifetime achievement as a global maritime and naval historian, beginning with a pioneering study of The Royal Navy and the Northwest Coast of North America, 1810-1914 (1971), through some thirty major volumes and numerous articles, culminating with the magisterial Pax Britannica: Ruling the Waves and Keeping the Peace Before Armageddon (2014) and Churchill and Fisher: Titans at the Admiralty (2017), a body of work which has earned him international acclaim as a Canadian scholar of the highest order”. 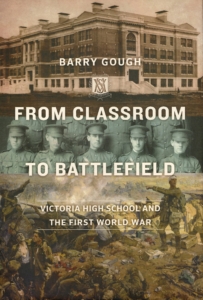 One of Gough’s books, From Classroom to Battlefield, Victoria High School and the First World War, was published in 2014 and is available at local bookstores, online at amazon.ca, or available through the Vic High Archives & Museum once Vic High reopens in early 2024.

See other posts on this website about or by Barry Gough.