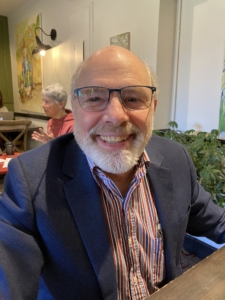 Disclaimer: For entertainment, not instructional purposes!

It may be a bit of a stretch to equate Arthur Warren’s 1966 noisy and smoky motorbike ride around the main hallway of Victoria High School to the 1969 movie Easy Rider. Firstly, Arthur rode an 80cc Yamaha trail bike while co-stars Peter Fonda and Dennis Hopper were on a Harley Davidson. And secondly, Arthur did not receive Academy Award nominations for best original screen play and best supporting actor (Jack Nicholson).

As a matter of fact, there doesn’t seem to be any recorded history of the event. It was long before cell phone cameras became de rigueur. Nor does Arthur have a vivid recollection of the incident. He remembers “lugging the thing up the stairs” to the second floor with the help of two or three friends (it weighed about 68-90 kg or 150-200 pounds).

“Not much to tell,” said the 1967 Vic High grad modestly. But he does confirm it happened. The “urban legend” that Arthur rode his bike up and down the school stairwells is not true, he added. “It was before 8 a.m., so not too many people (or) teachers around,” Arthur recalled. “I did one circuit around the main floor. No one stopped (or) confronted me. I remember being a little bit shocked (at) how much noise and smelly smoke I was making.” Arthur said he was never confronted by Principal Duncan Lorimer, staff or students about the incident. “No one ever said anything.” When asked how much thinking went into the caper, Arthur replied, “Not much!” 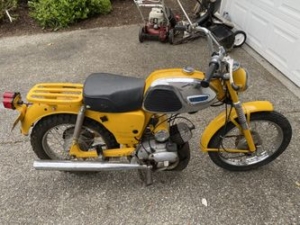 (1966 alumnus Craig Strickland remembers it differently, or perhaps there has been more than one motorcycle ride around the halls of Vic High? Click here to read what Craig remembers.)

Arthur’s family had a long association with Vic High. His parents and siblings all attended. He said he and his brother, John, were sometimes called the crazy Warren brothers.“I have good memories of Vic High. I really enjoyed it.”

Arthur said he admired the egalitarianism (the doctrine that all people are equal and deserve equal rights and opportunities) he saw at Vic High. He was involved in many Vic High activities, band (trombone), philosophy club, United Nations club and Calamity Players.

Arthur, who was a bright student, attended Sir James Douglas elementary and Central Junior High schools before arriving at Vic High, and went on to obtain a teaching degree at the University of Victoria and a masters degree in theological studies from the University of Toronto.

He did some substitute teaching but didn’t like it. In between, he was a logger, commercial fisherman, teacher of transcendental meditation, lumberyard worker (with classmate David Ashton at Victoria Plywood), realtor (for 25 years) and marriage officiant.

It started with spice mixes, jams and jellies in the kitchen of Arthur Warren, VHS 1967, and (then) wife Sylvie Rochette in the mid 1970s, with Sylvie’s desire to create healthy eating solutions for her family. In 1997, after selling products at the Saanichton Fair, it was formally founded to sell healthy, gluten-free, peanut-free food products and promote healthy eating all over North America.

With a  mission to “take back our health and change the course of our next generation’s wellness and relationship with food”, Saanich-based Epicure is now run by Chief Executive Officer Amelia Warren, daughter of 1967 Vic High grad Arthur.  It sells its locally-manufactured products through a network of consultants who also offer cooking classes, recipes, and kitchen tools and cookware.

Vic High alumna Lori Ann Locken, VHS 1974, was so taken with Epicure’s gluten-free products she could tolerate, she became a consultant. “I love how Epicure’s products are also low salt, lower sugar, and no preservatives.”  (You can reach Lori Ann on Facebook – Lori Ann’s Epicure Kitchen.

Epicure’s headquarters is in Saanich, and its U.S. base is in Salt Lake City, Utah. www.epicure.com.