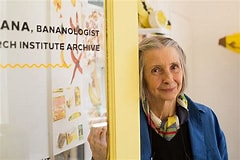 Anna Banana’s answer to the first question for this interview confirmed her right away as a free spirit. Asked about her education and how she got to Vic High, she replied, “I mostly walked from my home on Cambridge Street.” Despite a lengthy career in visual and performing art and many exhibits of her work, including at the Art Gallery of Greater Victoria, this free-spirited Vic High alumna delights in never taking her art too seriously.

Anna Frankham attended Sir James Douglas Elementary, Central Junior High, then Vic High for grades 10 to 12, graduating in 1957. She was a Vic High majorette and took part in track and field before working in Eaton’s advertising for a year. She then married David Long, a Vic High alumnus four years her senior who she described as an ‘art star’, before earning her teaching degree at the University of British Columbia. She taught in elementary schools in Vancouver for five years. 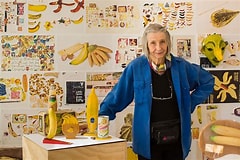 Anna says she had excellent art teachers at school, Bill West at Central and Mrs. Cameron at Vic High. Among her school friends were Carole Sabiston, a world-renowned, award-winning Victoria textile artist, and Donna (Cranton) Jones, another accomplished artist (and former Director of the Vic High Alumni).

In 1971, living back in Victoria, she began a career as a fabric artist. But unhappy with the marketing of her work, she declared herself the Town Fool of Victoria, making public appearances in a rainbow suit, her first one at Bastion Square. Prior to that, Anna had been performing and introducing students at various elementary schools to various art practices. South Park students were the most receptive, she remembers. She also gave art classes at seniors’ centers and shopping malls, always introducing herself as Victoria’s Town Fool, and launched the Banana Rag newsletter to reach a larger audience. 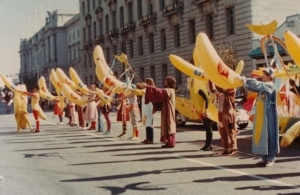 “That’s how it all started,” Anna said. “I changed my name legally [to Anna Banana] and continued to “fool around” in creative ways and settings, the objective ALWAYS being to engage the public in some creative activity besides shopping!” 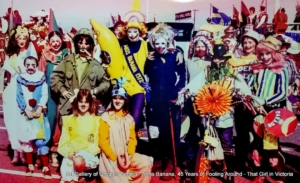 Anna’s long and varied career of performance art, writing, and small press publishing has included many unique events and initiatives. For example, she launched the Banana Olympics in San Francisco, published VILE magazine and its wide range of art mediums, and promoted international mail art through her Artistamp News and eventual local and international exhibits.

One of Anna’s unique exhibits was mounted in 2015 at the Art Gallery of Greater Victoria, a coming-home, full-circle moment steps away from the three schools she attended.  Anna Banana: 45 Years of Fooling Around with A. Banana was a collaboration between the AGGV and Open Space and included work from her accomplished career. Due to popular demand the exhibit was extended by four months, perhaps proving Anna’s belief that art should be fun and engaging. 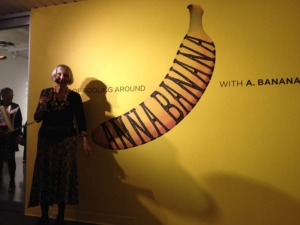 “I think many artists take themselves and their ‘craft’ a little too seriously,” says Anna, “while I believe creative work is valuable for itself.” She said the effort, concentration and time invested is therapeutic, fun, and stimulating for those who participate in her banana fun. “The thing I emphasize most about my work is that it’s a way of engaging the public in some creative/artistic activity which, left to their own devices, many people never exercise.  I see my work as part performance, part teaching to engage participants in an art practice.”