’59 Totems to be Enshrined at Vic High

’59 Totems to be Enshrined at Vic High 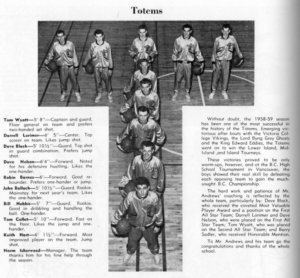 The 1958-1959 Victoria High School Totems, the first Vancouver Island team to win the B.C. high school boys basketball championship, will be enshrined in the Vic High auditorium, thanks to an anonymous doner. When the seismic upgrading at the Grant Street building is completed (hopefully sometime late fall), the 12 team members will each have their plaques mounted on the Lawrie Wallace Auditorium seats in back-to-back rows of six each. Plaques will be mounted for players Darrell Lorimer, David Nelson, David Black, Tom Wyatt, Barry Sadler, Robin Barnes, Tom Collett, Keith Hart, Bill Hobbis and John Balloch, team manager Norm Isherwood and coach George (Porky) Andrews. “They’re obviously out of their mind,” laughed David Nelson, referring to the anonymous doner. In a more serious vein, David added, “As we get older, you start thinking about legacies. Getting a bit of recognition is good.”

Five of the players have since died, Robin, Darrell, Tom Collett, and in the last year, Bill and Tom Wyatt. Porky, who was recruited in the late 1930’s by the University of Oregon Ducks and became that team’s captain, also played for the Victoria Blue Ribbons and was a player/coach for the Victoria Dominoes. He came to Vic High to teach, and earned a reputation as a tough basketball coach, but brought the Vic High Totems to provincial titles in 1959, 1962, and 1969. (Bill Garner coached the Totems to their 1966 BC Provincials win.) The ‘new gym’ at Vic High, part of the 1950s addition to the school, is officially named the Andrews Gym. He  passed away on May 26, 1999. 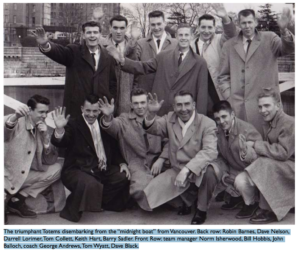 This pix includes captain Tom Wyatt. Mr. Hartley kept him after school on team photo day and he was missed! The team made sure he was front and center for this photo, the morning the team arrived back from the Provincials on the overnight boat from Vancouver.

The recent loss of Tom Wyatt was particularly hard for David, who kept in touch and had spoken to him via Zoom just weeks before Tom succumbed to prostate cancer. “He was such a fit guy, physically.” David described Tom as a bit of a vagabond who graduated with a doctorate in psychology and was a professor, mainly in Asia. He taught in Papua, New Guinea, Singapore, Brunei and was teaching in Macau when he died. “My kids loved him,” David said, adding that Tom also had a terrific sense of humour.

The two Davids, both already accomplished players and athletes, had transferred to Vic High in 1958, David Nelson from Esquimalt and David Black from Mount View (now Spectrum), in order to ‘play with the best’. Officially, though, (wink, wink),their transfer was based on gaining access to Vic High’s unique law course. Ironically David Black did go on to become a highly-respected lawyer.

After a 1958-59 season-opening loss to the Esquimalt Dockers, the Totems marched to the city and Island titles before capturing the 14th annual provincial tournament. A crowd of close to 5,000 witnessed the game at the UBC War Memorial gymnasium. David’s most memorable recollection was the game against powerhouse Vancouver College Fighting Irish. The Totems fell behind in the first half and instead of heading into the locker room at halftime, Coach Porky directed them under the stands where he dressed them down. The team clawed back to win the game and went on to beat Courtenay Towhees, 49-26, in the title game. The two Davids both went on to play for the UBC Thunderbirds basketball squad and became involved in the UBC Alumni, helping to raise about $4 million in scholarships for the university.

1960 alumnus Ray Pauwels says he’ll take his memories of the championship win to his grave!

As I recall, one of the Vancouver radio stations (CKNW?) broadcast the game on Saturday night and I was glued to the radio. The Totems had already beaten Courtney in the Island final so they had their number and the result was never in doubt as indicated by the final score. First thing, on Monday morning back at school, the student body welcomed the team back in the auditorium and when Mr Grant fired up the school band to “Come Give a Cheer” we almost blew the roof off the place. The standing ovation lasted forever!         I was sad to hear that Bill Hobbis and Tom Wyatt have both passed recently. They were both incredible athletes.

Totems Team members began reunions every five years but are now getting together every two years at the Union Club in Victoria. They last met there for Bill Hobbis’ Celebration of Life. David Nelson has kindly agreed to donate his 1959 Totems Championship jacket to the Vic High Archives and Museum, the last of the 10  original jackets in existence. Thanks, David! 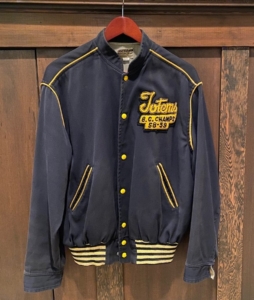 Note: Interest in Auditorium Seat Plaques is high. 43  were ordered in 2022 alone. If you’ve been meaning to order one, now’s the time while seats are still available. 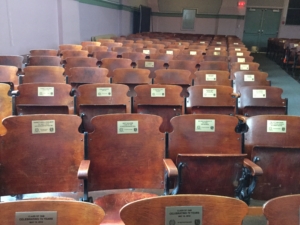