Tales from the Attic 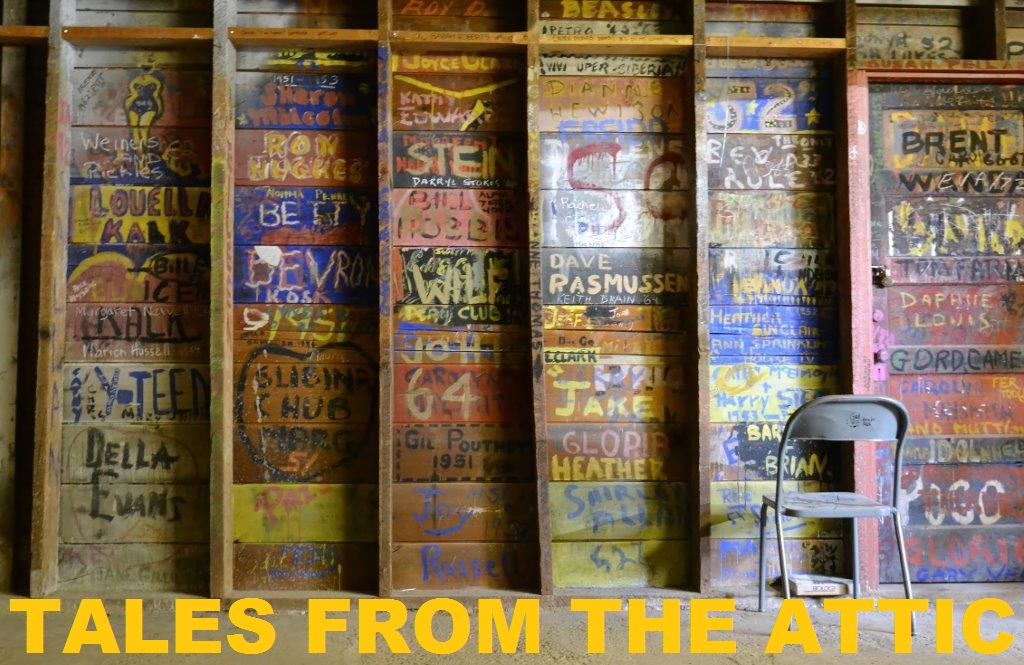 A place for Vic High stories, big and small. Send us your stories or come to the Vic High Archives and tell them to us so they can be added here  — we’re open Tuesday mornings from 9 am to 12 noon, any day that school is in session. Or you can e-mail us at alumni@vichigh.com.

Please feel free to contact us with your comments and suggestions about the stories listed below.

DECEMBER 2018: Finding Their Way to the Stars. A profile of two Fairfield boys who became internationally known physicists, and who inspired a new interest in astronomy at present-day Vic High. by Barrie Moen (VHS 1969)

JUNE 2018: Happy or Helsinki? In preparation for the 1952 Olympics in Finland, the Canadian Olympic Association invited Vic High grad Norma Stewart to Montreal to train for Canada’s swim team. But for Norma, this presented an agonizing choice! by Helen Raptis (VHS 1980)

FEBRUARY 2018: The Play’s the Thing. An illustrated history of Shakespeare productions in the new Vic High Auditorium during World War I. by Stephanie Ann Warner

DECEMBER 2017: Vic High and Ice Hockey. A review of the early history of ice-hockey in Victoria and particularly at Victoria High School. by Barrie Moen (VHS 1969)

MAY 2016: Mr. Smith’s Walking Stick. In 1893 a group of Vic High students presented their departing teacher with an engraved silver-handled walking stick — and now it’s come home from Alberta! A true treasure that even our Archives volunteers didn’t know existed. by Barrie Moen (VHS 1969) with design by Eric Earl (VHS 1968)

APRIL 2016: Grads in the Attic. A place of history and mystery! Take a virtual tour of the attic to find your name, or to take the tour you never got to experience. Photos by Syvia Michalewicz, digitized by Eric Earl (VHS 1968)

MARCH 2016: What Is the Fashionable Vic High Girl Wearing? From the early 1900s to the late 1930s it was the “middy blouse”. by the Archives team

NOVEMBER 2015: A Soccer Ball Rolls Through It. A century of “the beautiful game” at Vic High. by Barrie Moen and Doug Puritch (VHS 1969)

OCTOBER 2015: Cumby’s Ghost. He was perhaps the most accomplished high-school coach that no one’s ever heard of. Is that why his ghost might still walk the halls of Vic High? by Barrie Moen (VHS 1969)

SEPTEMBER 2015: Archive Treasure 1884. It was probably a Christmas present: a delicate hand-painted autograph book used by a Vic High girl from 1884 to 1887. Recently it was donated to our collection by her granddaughters. by the Archives team

APRIL 2015: The Block V. Have you ever wondered why you didn’t receive a Block V? This intriguing story explains what accomplishments were needed and what  the associated number meant. by the Archives team

APRIL 2015: Victoria High School in the 1950s. A Vic High grad recalls some of the influences that led to his successful career as a particle physicist, in an article originally written for “Vic High 125” in 2001. by A.J. Stewart Smith (VHS 1955)

FEBRUARY 2015: The Lucas Family at Victoria High School. Memoirs and mementoes from a newly-arrived family of Irish immigrants who came to Vic High a century ago. by Anne Clark

JANUARY 2015: A Thomson Cup Comes Home The BC Boys Rugby Championship Trophy that Vic High won during the 1925-1926 school year is donated to the Archives. by Barrie Moen (VHS 1969)

FEBRUARY 2014:  A Time for T. Why do all the Vic High team names begin with T? A simple question leads our Archives volunteer on a search through Vic High’s athletic glory of the first half of the 20th century, culminating one of the most bizarre basketball games the Vic High boys ever played! by Barrie Moen (VHS 1969)

JANUARY 2014: The Jacket from Vic High  A recent email request to our Archives uncovered this story about a boy from England whose life was changed by coming to Vic High for one year (1968-69). by Geoff Bell

DECEMBER 2013: Fire at Will  A true tale about the danger of hanging out in the old attic back in ’44.  The adventure of  “Sylvia Corbett and the Whistling Bullet.” by Barrie Moen (VHS 1969)

NOVEMBER 2013: Artifacts in the Air Ducts Not all artifacts are found in grid-marked diggings by archaeologists toiling in the sun. Some can be found with a glance in the right direction at Vic High. by Barrie Moen (VHS 1969)

OCTOBER 2013:  Remembering Lieutenant Frank Constant Hall  A tale of remembrance and personal sacrifice. A reminder of the brave soldiers whose names appear on the memorial in the entrance foyer of Victoria High School. by Barrie Moen (VHS 1969)

SEPTEMBER 2013: The Lost Key  A tale of the opening day celebrations at Victoria High School and the presentation of a ceremonial key to the front entrance. by Barrie Moen (VHS 1969)