This award-winning collection is housed in the Faith Reimer Room (Room 100) on the school’s ground floor, just inside the “Girls Entrance” east of the main entrance. Staffed by friendly volunteers, the Archives is normally open to the public from 9 am to noon every Tuesday that school is in session.

However, with the upcoming closure of the Fernwood building for its seismic upgrade, the Archives is packing up in readiness for non-accessible storage for two years. At present the collection is open by appointment only: email archives@vichigh.com (quickest option). Or you can call the school at 250-388-5456 and ask for the Archives; leave a message if we’re not there and we’ll call you back ASAP.

Due to packing and storage activities, the Archives is not receiving items at present.

In its annual recognition ceremony for 2012, the British Columbia Historical Federation awarded a Certificate of Merit to the Vic High Alumni Association and Archives. The certificate recognizes the Association’s and the Archives’ achievements in “strengthening and preserving the heritage and archives of Victoria High School, the oldest public high school west of Winnipeg, for the next and future generations.”

The B.C. Historical Federation, established in 1922, is an umbrella organization of provincial historical societies. It has over 300 members, and is responsible for many publications including the quarterly journal British Columbia History.

Here are three photos from the extensive collection. 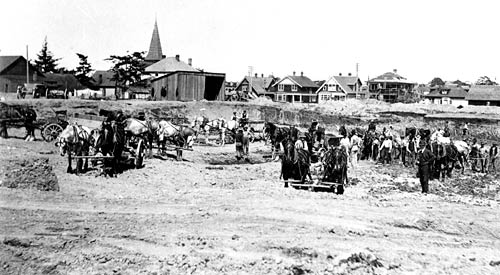 The excavation for the current school building (the fourth in Vic High’s history) began in 1912. This picture looks across the foundation site towards Fernwood Road. You can see the steeple of what is now The Belfry Theatre in the background. 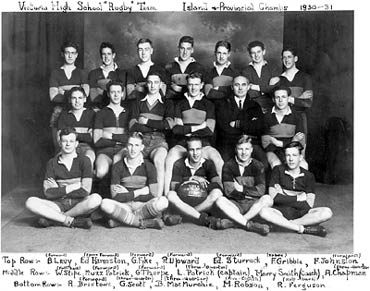 Yes, this is a picture of the Vic High rugby team that won the provincial championship in 1931, but it is also a link to the days when Victoria won the Stanley Cup. The Patrick brothers in the picture, ‘Muzz’ and Lynn, were the sons of Lester Patrick who owned and managed the Victoria Cougars of the Western Canada Hockey League. In 1925 they became the last non-NHL team to win the Stanley Cup. To pick up the story from Come Give a Cheer:

“Lynn Patrick, VHS 1931, starred in rugby with the BC Reps; was a member of the Blue Ribbon national basketball title-holders; played football for the Winnipeg Blue Bombers; and played hockey for the New York Rangers from 1935 to 1943 (becoming scoring leader and NHL all-star in 1941 / 42 season). Murray ”Muzz” Patrick, VHS 1933, was no less impressive. Captain of every VHS team in his senior year, and winner of many track and field awards, he too played for the Blue Ribbons and teamed with Lynn to lead the 1939 / 40 Rangers to the Stanley Cup. Muzz was also Canadian amateur heavyweight boxing champion and a professional six-day cyclist. 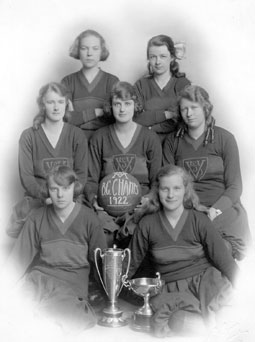 Fashions and even rules have changed since these Vic High girls won the provincial basketball championship in 1922.

For a comprehensive history of education in British Columbia, go to the Vancouver Island University web site.