The “Secret Sixty” were a group of Vic High Tech students recruited to work on a top-secret project during World War II.

In February 1942 the Cunard liner Queen Elizabeth ‒ the largest ship in the world ‒ slipped quietly into Esquimalt Harbour. After having been converted to a troopship a year earlier, she now needed some maintenance, and the Esquimalt drydock was the only one on the Pacific coast large enough to hold her. 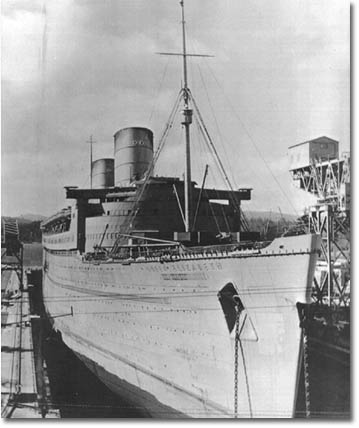 Sixty boys were recruited to clean the ship’s boilers, presumably because of a wartime labour shortage. For security reasons, everyone was instructed not to talk about the mammoth ship. Although the Queen Elizabeth towered above her surroundings and was visible to all Victorians, there were no reports in the media about her presence.

The Alumni Association had heard rumours of the Secret Sixty for years, but informal appeals had elicited no information. Recently, however, a conversation with Dr. Don Elder (VHS ’43) brought the welcome news that a patient of his, Jack Weber, had been one of the “Secret Sixty.” I contacted Mr. Weber, and he provided us with a written memoir which is now housed in the Vic High archives.

Mr. Weber rode his bicycle to the dockyard each day from his parents’ home in James Bay. Armed guards were posted along the E & N Railway lines and at Colville and Admirals roads, while Royal Canadian Navy corvettes patrolled the harbour entrance looking for Japanese submarines.

The students were paid 40 cents an hour for the grimy work. I asked Mr. Weber if they were fed too; no, he said, but the ship’s canteen did provide them with cigarettes. To get outside for their “smoke break,” he and the other boys climbed the equivalent of nine storeys of stairs inside the smokestack.

Mr. Weber’s recollections resulted in his appearing on Global TV’s back-to-school special which aired live from Vic High in September 2010. He was also featured in a Times Colonist article about the Secret Sixty, which resulted in still more archival finds: Youbou resident Allan Scott saw the article and had photographs (which were forbidden) of the ship in drydock. These photos are now also in the Vic High Archives.